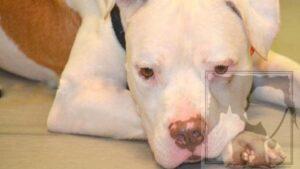 One hundred and ten days. More than 3½ months. All summer long. That’s how long a dog named Picasso has been waiting at the South Jersey Regional Animal Shelter to find a new home. He’s a very handsome young man that seems to get passed over time and time again for no good reason. He not “the squeaky wheel gets the oil” kind of guy, which I’m guessing is his downfall in attracting attention. He’s the type of dog who loves to be with you, but doesn’t have to be “on” you – which is a bonus, since he weighs about 55 pounds. He has worked his way into the hearts of our volunteers who walk him, take him into our play yards, let him wade in the pond and take him to offsite adoption events. All he needs now is someone to love him as their own.

Lilla is only 15 months old. She was the mother of three 1-week-old kittens when she was brought to the shelter back on May 25, more than 120 days ago. Two weeks after she got here, she was gracious enough to take one more foundling into her care when little Ezekiel arrived in need of nursing mom.

Lilla and her litter then went to into a foster home for six weeks before returning to the shelter, all bright-eyed and bushy-tailed and ready to be adopted. Larry, one of her boys, along with Ezekiel, are both still here. At 16 and 14 weeks, respectively, they have spent most of their lives at the shelter.

Lilla is a wonderful, loving and affectionate, but she’s a plain black cat, which means she, like Picasso, will also get passed over. Larry and Ezekiel are just past the tiny furball stage and tend not to get the same attention as the younger kittens.

These are just four of the pets who have been in long-term shelter care. There are many others who have been waiting for weeks and months. Keeping these animals socialized, and both physically and mentally healthy, is a big challenge, and only successful due to the efforts of many people. Foster homes are essential not just in raising infants, but also in providing little overnight or weekend respites for the animals in a home rather than in a cage or kennel. Volunteers come in every day to exercise and socialize with the pets being housed on site. They work on basic training, grooming and enrichment for mental stimulation; just like with humans, boredom in pets is a recipe for trouble. The challenge is providing this for as many as 400 animals in the shelter and foster care on any given day.

Our staff is constantly searching for ways to market our homeless pets so that they can get out of the shelter quickly. Pictures, videos and sob stories often help tremendously, but not all pets are photogenic. They don’t all do cute things when the cameras are rolling and they don’t all have tragic stories that pull at our heartstrings. That doesn’t mean that they’re not great pets; often, they’re the best kind. If you’re not in a position to adopt, come walk a dog, read to a cat or play with the kittens, there are lots of opportunities to make a difference in the life of a homeless animal.

Source: 100 days and counting: Will anyone adopt these dogs?