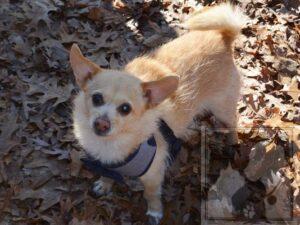 Beauty is in the eye of the beholder; love is blind … and often unexpected. Such was the case for the Fifth family when they came into the South Jersey Regional Animal Shelter a few years back looking to adopt one of our big, beefy pit bulls. Mrs. Fifth is big into rescuing the breed, and the family already had a particular dog in mind when they visited. The new pet was to be a birthday gift for their daughter. What none of them expected was to leave the shelter with a half blind Chihuahua/terrier mix that was in pretty rough shape from his time on the streets of Vineland.

Although they had come to meet one of our female pits, you can’t walk into the adoption rooms and not take a look at everybody. Most people who come to the shelter with hopes of adopting like to walk through both the cat and dog rooms, even if they are looking for one specific thing. Curiosity is a wonderful thing and sometimes leads us down paths we hadn’t expected. In the Fifth family’s case, their find was the same species, just in a much smaller package.

As they toured the dog adoption room they came across Butterbean, a pint-sized, scruffy Chihuahua mix who decided this family was meant for him and he was going to get to them – even if he had to dig his way out of the concrete kennel! As they approached his kennel, he took one look at them and started to dig furiously at the floor as if to tunnel his way out to them. His attempts paid off, because he got their attention very quickly and the “love at first sight” thing seemed to go both ways.

Dobby, formerly known as Butterbean, has been a very happy addition to their household and a fixture on Mom’s lap. They are so enamored with him that they have entered him in the shelter’s Dog of the Year Contest. You can vote for Dobby or any of our 12 contestants online at southjerseyregionalanimalshelter.org.

It’s wonderful that we are able to have such immediate connections with animals, especially when it flies in the face of our preconceived notions. The key of course, is to be realistic about whether the pet you fall for fits into your lifestyle in a manner that suits you both. Dobby’s situation was good because small packages can fit into large spaces, but the opposite can be challenging. People often come in looking for small dogs but are attracted to a big dog or a puppy that will grow into a much larger animal than they had in mind. Serious thought needs to given before taking in a pet whose needs are not what you had planned for. My Old English Sheepdog is from a rescue that took her in when her original owners could no longer keep her. She had been purchased at 8 weeks old as a present for the man’s girlfriend. They lived in a small, third-floor condo. At 13 weeks, the pup had grown to 28 pounds and they figured out very quickly that she was not going to fit into their apartment-style living.

Both Dobby and my sheepdog had wonderful endings to their stories, but the shelter often receives dogs who have outgrown their owner’s ability, or desire, to care for them. We have pets of a wide range of size and age at the shelter. We’d love to have you come in and meet your perfect match.

Source: A dog determined to go home from the shelter