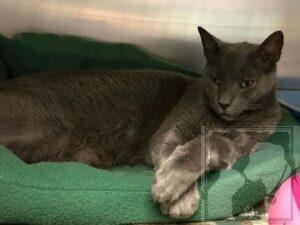 Animal sheltering is, and always will be, a mixed bag of emotions. But heading into this Thanksgiving, I was struggling to find things to be grateful for. We have had several situations lately that have been heartbreaking, and they took a toll on me and other staff members at the South Jersey Regional Animal Shelter.

A few weeks ago, a white Staffordshire mix with cropped ears, an emaciated figure and sores all over arrived at the shelter. We named him Christian and started him on the road to what we hoped was recovery. Provided with a comfortable bed and blankets, warmth and love, Christian was comfortable for the first time in a long time. He didn’t want to eat, so staff went through an array of delicious foods to hand feed him. He didn’t want to get up, so we sat in his kennel with him, where he lay his head in our laps and was content. Sadly, the news from our veterinarian was not good: Christian struggled to walk and grew weaker, despite our best attempts to get him back on his feet. There wasn’t anything we could do to keep him comfortable. We had to put him to sleep to prevent him from suffering. But how I suffered with the regret that I wasn’t able to do more for him …

On the tail of that heartache came another awful loss. After their owner was admitted to a hospital on a long-term basis, orange tabby cat Rolie Polie Olie and collie mix Zowie found themselves admitted to the shelter. Both were seniors, and both were confused and sad. There are no accommodations at the shelter where we could have them together, so they were separated, and I made it my goal to get these two back together in a foster home or rescue who could help them. Olie did better and was moved to the Adoption Room, while sweet Zowie was so overwhelmed that she barely got off her bed and quickly became ill with kennel cough. With Zowie’s situation becoming urgent, I contacted senior rescues and, thankfully, found a rescue partner, Senior Dog Haven and Hospice in Delaware, that was able to help both Zowie and Olie. Zowie was rushed to the veterinarian as her health continued to decline; she was not eating and, in hopes of perking her up, Zowie and Olie were reunited at the vet’s office and immediately began cuddling together. It was the most heartwarming update I had received in a long time. I thought it was my reminder that, as sad as some situations had been, there is always an upswing.

But then I received a text that stopped my heart. Zowie was struggling to breathe – they were doing everything they could, but it wasn’t looking good. A short time later, Zowie had to be euthanized; she was suffering as she struggled and wasn’t responding to any of their interventions. Rolie Polie Olie was brought back to her to say goodbye. And Zowie was gone.

Despite the regularity of heartache, anger and frustration, I don’t cry often. But I cried over the loss of Zowie, remembering cuddling her and promising her everything would be OK. Over a reunion that was too brief. Over the happy ending that I needed, that wasn’t going to happen. It felt like too much. All I wanted to do was retreat from the shelter and the animals. But the need doesn’t stop just because the staff is dealing with difficult feelings – work still needs to be done, and other animals still need help.

I had to mentally shift gears to be able to help the others. Instead of focusing on the loss, I thought about what would have happened to Zowie and Christian if it wasn’t for the shelter. Christian would have continued to suffer in the cold until his eventual death. But when he died, he wouldn’t have been surrounded by people who loved him and he probably wouldn’t have gone as peacefully as he did. There wasn’t anything that could have been done to prevent Zowie from passing; I am 100 percent confident that the rescue did everything it could for her and that the decision to let her go was in her best interest. I know they bonded to her as deeply as I did – she was just that type of dog. I have to choose to be grateful that they were able to reunite her with Olie. Maybe she had been slowly dying for some time, and maybe she needed to be able to see him to let go. And while Zowie is gone, Rolie Polie Olie will never be alone and homeless again.

When you choose to see light, it becomes easier to see. We had a litter of kittens that had been at the shelter for over a month. They were becoming healthy and social when, suddenly, they developed a serious virus that claimed three of their lives. This was heartbreaking, but instead of giving up, we were able to work with Cape Atlantic CATS to provide extra veterinary care for the kittens. CATS pulled two adult cats in foster care to allow us to move the remaining two kittens into foster, and provide them with the best possible chance for recovery.

Source: A tearjerker week at the SPCA