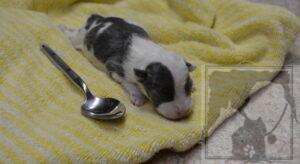 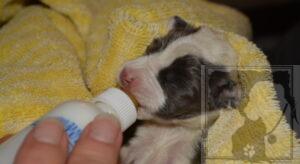 Working in an animal shelter is always a bit of a roller coaster ride in terms of the joys and the heartaches that we face. I happened to be on one of those wild rides this past week and I’m still not sure when or how the ride will actually end. This story will (hopefully) be one that we will update on a weekly basis over the next 8 weeks or so. I should warn you though; it could end badly, so stop reading now if you’re not up to taking the ride with me.

Let me back up about a month ago or so when the shelter received a litter of three day old puppies whose mother had died shortly after giving birth. A couple of our foster parents and me split up the pups and tried to bottle feed them. Unfortunately, whatever trauma had taken the mother’s life; it was something that affected them as well. We lost the whole litter within a few days. I have raised many, many litters in my fostering career and had, on the rare occasion, lost a pup, but I had never lost an entire litter. It was devastating to say the least.

A couple of weeks ago we got a single pup in that was just two days old and once again, I took her home. With the loss of the other litter fresh on our minds, we were determined to give this pup every chance to survive. For two days, we kept her with us instead of in a carrier so that she would be warm and feel another heart beat. She wasn’t a great eater, not eating much at one time or suckling on the bottle as she should have. Although she seemed to be making a tiny bit of progress, she woke me up early the third day suffering from respiratory distress and died shortly after. 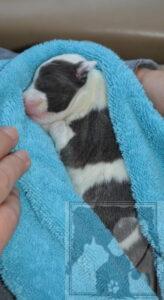 Newborn animals without mothers are fragile to say the least, I knew this going in, but it was still very sad to lose her. After those back to back experiences, you can imagine my reaction when I got the call that we had another infant pup at the shelter. It was Sunday and although I was off work, I happened to be on Rt. 55 right at the exit for the shelter when the call came in.

And so, here I am again, fate had put another fragile life in our hands. This tiny baby had been found in Bridgeton under the porch of an abandoned house. The police brought her in to the shelter after a resident reported finding the pup. When she arrived at the shelter, her body temperature was so low that it didn’t register on the thermometer. I had never seen an emaciated infant alive, until this one; every bone in her tiny body and head stuck out. She was dehydrated and full of fleas. Three feet in the grave and one on a banana peel, so to speak… 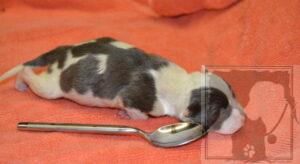 Still, we wanted to give her a chance, so we warmed her up, gave her fluids, and I took her home to start bottle feeding and de-fleaing her. She was barely sucking the on the bottle and three hours later she was going limp; I decided to take her in to be euthanized rather than allow her to suffer. I packed her up, took her in to the shelter, got her on the treatment table, had her prepped for the needle and suddenly she started whining and struggling. I couldn’t do it.

I took her home again; she ate a little, slept a little and whined a little. A few hours later, she was limp again. This time, I thought she would just go on her own.

It’s been four days since we brought her home. She has gained a few ounces and quite a bit of strength. She now looks nice and round with no bones sticking out. The fleas are gone. She now sucks on the bottle so hard and fast that she chokes if I don’t pull her off every couple of minutes and settle her down a bit. She has been named Gracie, short for Amazing Grace. 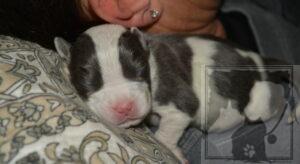 She’s still not out of the woods; I won’t be completely comfortable for a few more weeks yet. She does not have the advantage of nursing from her mother, I don’t know if any damage was done in the hours that she was cold, starving and dehydrated.  If she’s still alive when this column is published, she may be just opening her eyes for the very first time and I’m really hopeful that the wild roller coaster ride is behind us; for this little girl at least. Stay tuned… 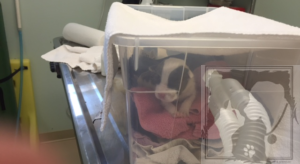 [webmaster’s note: Grace is still fighting the good fight at the time of publishing. We will continue to update her story here, so please check back often.]

Would you like to help SJRAS continue the lifesaving work we do each day? Please consider volunteering. Can’t volunteer, but would still like to help? Consider making a credit card or paypal donation – we operate on donations, so without your help, we cannot continue to help precious souls like Grace. And last but not least, if you can’t do either of the things above, please use your mouse to save a dog – click on the share buttons to help spread Grace’s story on your social media.