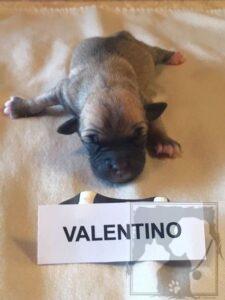 Holy moly! If you read the column last week, you know that I was pacing the floors waiting for my foster dog to deliver her pups. It turned out to be a VERY LONG wait. Throughout the day she was restless, up and down, in and out of the closet that she chose for her “birthing suite.” We knew by 6:30 in the morning that she was ready and we were vigilant all day, but by 11 o’clock that night, I was exhausted and nothing was happening.

I finally decided to try to get some rest. She had other ideas.

At midnight, I heard a decisive yelp from the closet and, sure enough, the first pup was working his way out. I had never heard a mother dog cry out during delivery, but I have read that they experience contractions much like human mothers and therefore must have similar pain. She cried out two more times with the second and third pups, but after that she seemed to settle in and take the deliveries with stride. I think she is a first (and last!) time mother, so her agitation and lack of experience probably added to her discomfort.

A little after 3 a.m., she finally delivered the last of her eight – yes, EIGHT – puppies. That’s a very large litter for such a little dog. As I stated last week, I was sure that she was either carrying a few big pups or a lot of little ones, but I didn’t expect EIGHT! Typically, small dogs have small litters; five would be considered large for them. The last puppy took the longest between births, and by that time she seemed to be exhausted and lay down, almost nodding off, until a few seconds before the last little girl popped out.

After she had finished removing the sack from the pup and getting her settled, I wanted to get mama cleaned up and get her outside. I felt terrible, because it was the night that it snowed and I hated like heck having to send her out in it, even for a minute, with what she had been through.

I needn’t have worried. After letting her out, I peeked through the window to make sure she was getting off the deck and doing her business. Imagine my surprise when I spotted her doing the “snow plow,” running her chin and belly through the new snow and rolling in it excitedly on her back. She came back in and was zipping around, acting crazy, like dogs do when they have just had a bath. She drank some water, ate a huge predawn breakfast and finally retired with her new babies for a few hours.

In spite of her being new to motherhood, she has been fantastic with the puppies. She probably will weigh in at 13 or 14 pounds after her milk is dried up, but right now she’s eating more in the course of a day than my 85-pound sheep dog does. She gets a cup of kibble and a half-cup of canned food three times a day, snacks on dry food in between, and gets a handful of treats at bedtime. Eating for nine is obviously a big job!

The puppies will be ready for adoption around Valentine’s Day, and I will keep you updated on their progress as they mature. Right now, they look like little bubble-headed mice, with eyes not yet open and just able to slither around a little on their bellies. Check out thedailyjournal.com for a video!

Those of us at the South Jersey Regional Animal Shelter hope that you are enjoying your family and friends over this holiday season and please keep in mind that we have many pets here that are waiting still for a safe, warm and loving home like yours.