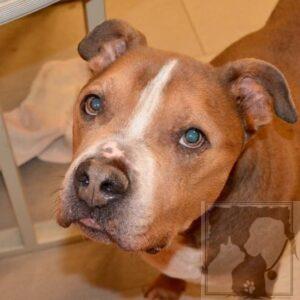 Just a few months ago, I wrote about the special bond between our foster Chihuahua, Stuart Little, and my daughter.

It was very ironic because this 4 pound white Chihuahua could be quite aggressive to everyone else, but somehow bonded to her in a way that was both unbelievable and heartwarming. Unbelievable, because most sensitive dogs won't tolerate the antics of children (and she has quite the repertoire of antics) and heartwarming because they truly became best friends. But as all dog owners know, our time together is finite and sometimes that ending can be unexpected.

Only two days after Christmas we found Stuart sprawled out and unresponsive in his apartment. His apartment was a pen that had been set up in our living room to help him acclimate after he suddenly went blind. While blood work and a vet check showed no health concerns, he had difficulty adjusting to his special need.

His apartment (in addition to daily walks and lots of time with his best friend) gave him a safe space. I went to put the baby down for his nap and reminded my daughter to take Stu for his walk. I could hear the fear in her voice when she said that something was wrong with Stuart and as soon as I saw him I knew the situation was bad. Fearing the worst, I sent her upstairs and prepared to remove his body, when he picked his head up. It lolled to the side; his breathing was so shallow. I placed him in his carrier, packed up the baby, and told my daughter we needed to get to the vet immediately - we rushed out the door.

The car ride was devastating. She was in a panic, alternating crying, asking if he was still alive, and begging him to live because he was her best friend. It seemed endless and it didn't get better when we arrived to see the vet. She was able to quickly confirm my fears; Stuart was dying. He had suffered a massive event - a stroke or seizure - and was not going to recover. We had to let him go.

As a parent, our first instinct is to protect our children. But just behind that is the knowledge that we must help them grow and part of that is learning how to deal with difficulties, and at times, heartbreak. All I wanted was to tell her that he was going to be fine...maybe even incorporate that imaginary farm where animals go to heal from all types of hopeless situations.

Instead, I told her that her best friend was never going to be like he was and that he was suffering. That we were able to give him medicine to help him sleep, but that he wouldn't wake up. He would be at peace, but we would be left to miss him. My sweet girl, only 5 years old, immediately made a choice that I have seen adults struggle with. Not only was she able to let him go so he wouldn't suffer, but she asked to hold him when he got his medicine. She knew that there was nowhere else in the world that dog would rather be than in her arms. As a parent, it's also strange what we feel pride in and through my heartache; I was so proud of the compassion and selflessness that she showed that day.

Sometimes she talked about wanting another dog, but the timing wasn't right. We were so busy; every minute of every day was filled with things to do or places to go. There just wasn't time to acclimate an animal and give them the care they deserved with our schedule. Then COVID-19 came, and everything but family and home went away. We opened our home to not only a foster kitten, but also a very old dog. Alissa walks him on Stuart's leash every day.

Grief ebbs and flows. Walking through it with a child makes things so much more complicated, yet also so much simpler. Her heartbreak remains and some nights her tears still fall like rain, but she also had genuine joy that Stuart has his eyes back in Heaven. Comfort can be found in the stars, where he watches over her or in a breeze, when he's running beside her. It's hard to imagine another bond just like what Alissa and Stuart had, but helping other animals has been the right way for us to move forward and honor his memory.

Source: Bonding with a pet is worth all the possible heartache