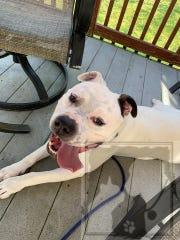 When it comes to animal sheltering and rescue, emotions play a big role in our success stories. If people didn't have strong feelings, we would never be able to make such a difference for the animals. However, sometimes there are animals who are "regular" or "normal" and don't have a sob story that elicits strong emotions ... and these animals deserve as much of a chance as any other animal!

Sadly, there are many animals who come to us with heartbreaking stories - from pets who were abandoned to victims of cruelty to survivors of terrible injuries. These animals often receive a lot of well-deserved attention; but there are many animals whose stories we don't know, who remain in their shadow. These animals often linger at the shelter for weeks to months, waiting and hopeful.

One such dog is Harden, an adorable 3-year-old American bulldog who found himself returned to the shelter twice after failed adoptions. Harden arrived at the shelter young, healthy, happy and handsome. During his time with us, we discovered that he wasn't the easiest dog to place simply due to his size and strength and lack of prior training. But as much as we begged to find help for Harden, none could be found. Had he been hit by a car or the victim of terrible abuse, he likely would have received more attention.

Harden had been in the shelter for more than 200 days. We began to question his adoptability as he became increasingly stressed after his returns. He was returned due to a common behavior - mouthing. When Harden gets overexcited, he grabs whatever he can (often an arm or a hand) and mouths it - obviously, not an ideal behavior from an 85-pound dog.

We didn't believe that this was an aggressive behavior, but as he grew more stressed it was getting worse and we had to question his quality of life. We knew we had to make a decision about what to do with Harden - the kennels were filling up, he wasn't going anywhere, and no one, including Harden, was happy about his situation. Fortunately, our Foster and Rescue Coordinator Jessica had a feeling about him and decided to give Harden a chance. Despite working long hours at the shelter and having multiple pets and fosters of her own, she brought Harden home and began to learn all about this overlooked pup.

Jessica started working with Harden by giving him a two- week shutdown. This is a very effective way to introduce any new dog into your home (look it up!). Harden was successful in those first two-weeks, taking lots of long naps, safely becoming accustomed to the dogs and people in the home, and getting comfortable in his safe spot - his crate.

Harden has since shown his true colors. He loves the other dogs in his foster home and is super friendly. Given structure and firm guidelines, his mouthing behavior has declined and proven to be very manageable. He is actually the ideal dog for help - while he's not perfect, he is a good dog - friendly, happy, and great with other dogs. However, we still have been unable to find placement for Harden and Jessica simply can't keep him forever.

We're going to officially "reintroduce" Harden in hopes of finding his forever home or a rescue to help him on his way! You can also learn more about Harden by visiting the Facebook page "Foster Life" where you'll see even more photos and videos of Harden in his foster home.

Check out Harden! This handsome hunk found his way to the shelter after giving up the single life on the streets. Harden remains an eligible bachelor (although he is neutered!) looking for the right person to complement his carefree, happy lifestyle.

Harden's so carefree that he's actually looking for someone who can add a little structure to his days ... a little training goes a long way with this big boy! Harden is delighted with canine companions, big or little, as long as they are cool with his constant need for a playmate (picture a kid repeating "play with me, play with me!" but in barks instead of words.). He's not a great match for cats though.

Like the beefcake he is, Harden has a lot of strength, but less endurance. He loves outdoor time and activity, but also likes to chill upon his return home. His favorite place to chill is his crate and he's housebroken. Harden loves everyone, so much in fact that he sometimes needed to be reminded to take it easy. Due to his exuberance, size, and complete unawareness of his own strength, we recommend that if a home has children, they be on the older side.

Hanging out with Harden is a good time - he loves everyone and knows how to have fun, whatever the situation. He's very food-motivated (especially if it involves cheese!) and although he's not quite ready to "grow up," he's ready to commit to a forever family. If you can picture Harden in your home, please contact us at Fosters@sjras.org or send in our online adoption application.

Thank you for taking the time to meet Harden. In addition to Harden, there are dozens of cats and dogs at the shelter who are hoping to steal your heart. Please remember that even if we don't know their story, every animal has one. Every animal at the shelter has had their own journey, and all have lost someone along the way. They are all looking to make a connection and if you take a minute to look in their eyes, you may find that the one who speaks to you isn't the one you expected.

Source: Every animal has a story and needs love, including Harden