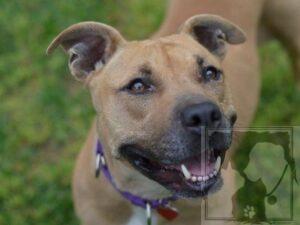 Did you ever try to envision an animal as a human? We often given animals human attributes, typically based on appearance or characteristics. As we get to know an animal more and more, the more human they almost become. Envision the awesome pictures of dogs who resemble their owners, or folks who give their little dog a “big” name because of its larger-than-life personality.

I have been quite lucky to get to know a special dog over the past few months. Her life has been a journey of hills and valleys. Currently, she is in the care of an extraordinary Cumberland County Society for the Prevention of Cruelty to Animals foster home and has made quite an impression on not just me, but everyone she meets. When I try to envision this dog as human, I hear the moving strains of Gaelic music that can either soothe you to sleep or inspire you to dance on a table. I think of fiery reds and emerald greens, of speed and agility. I think of fearlessness and devotion … I think of Merida, the Disney princess who redefined how we think of a heroine.

The canine counterpart to Merida is actually named Fiona, and she’s a 4-year-old who found herself in a terrible situation this winter. She had given birth to seven puppies but was not receiving the care a nursing mom should. When the CCSPCA arrived to help her, she was literally skin and bones and living in the cold. Her ribs and hip bones were clearly pronounced.

But she was brave. Despite what she had been through, she didn’t fear her rescuers. Not only did she immediately seem to love us, but she trusted us. The entire family was safely rounded up and moved quickly into foster care. Fiona continued to take amazing care of her puppies, while her foster family concentrated on caring for her – possibly the first time anyone ever truly cared for her well-being. Fiona gained 15 pounds in just a few weeks.

Fiona was a loyal and loving mom to her puppies. She was so tolerant of their puppy antics and was nurturing to them. She trusted people completely with her pups, but would have never let anything happen to them. She was a true Mama Bear, if you will.

As often happens, once Fiona’s puppies reached an age where they were able to move on, they were all quickly adopted. Fiona, however, remained. In the weeks that followed, she blossomed on her own. Her body became not only healthy, but like Disney’s Merida, strong and athletic. Her foster mom has photos of her moving with such grace and athleticism, it’s like she’s flying.

But the most special thing about Fiona isn’t her spirit, nor her bravery, nor her athleticism. It’s the incredible fierceness of the love that she has to share – with everyone. Fiona simply adores people … big people, little people, old people, young people, new people, and trusted friends. She is an instant best friend, a complete companion, a dog for life. I guarantee that if you meet Fiona, she will react by wagging her entire back end in excitement and quickly flopping over so you can rub her belly. Meeting Fiona warms your heart.

Fiona has been in foster care since March. She’s well-loved and cared for, but ready for a home all her own. A home where she can share the tremendous love she has with an all-human family. A family who shares her love for play and appreciates her spirit and spunk, which make her so special. While it is a fine kennel she stays in, “Níl aon tinteán mar do thinteán féin” (There’s no place like home).

Please note: You can find pictures and videos of Fiona’s story on her Facebook page:  “Foster Life.”