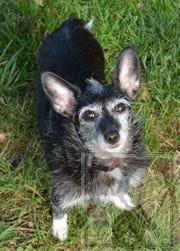 Twice a year, on both the Fourth of July and New Year’s Eve, we remind our readers to be aware of the effects that fireworks and firecrackers can have on our pets. It’s not unusual for the shelter to receive a surge of frightened animals for a few days after these very noisy celebrations. This year, however, we had one “guest” with a very interesting story … if only we could know the whole thing.

On July 7, our staff came in and found a handsome little guy we aptly named Shorti had been checked into our fine establishment by the Salem Animal Control Officer in the wee hours of the morning.

Weighing in at all of 11 pounds and sporting a long, luxurious white and caramel-colored coat, he was, shall we say, less than happy about his current situation. Given his beautiful coat and the fact that he was neutered, we figured that someone would be frantically searching for him. He sat in the rear of his kennel eyeing us up as we began the daily routine of cleaning and feeding.

A member of our staff went in and sat with him for a bit and he finally deigned to allow her to pet and comfort him. Once he relaxed a little, he got up to move around and we quickly realized that he was limping on both his front and back leg.

The ACO had picked him up from the Salem Police Department where he had been dropped off the evening before. There was no information as to where he was actually found but we had high hopes that someone would come for him.

He was not exactly cooperative when the veterinarian examined him but we chalked that up to his being in pain. He had no broken bones but suffered from bad swelling in his joints. The source of the injuries was a bit of a mystery. Although he had obviously suffered some sort of impact, there were no outward signs that he had been rolled by a car, the most common cause of injury in strays, because there were no exterior wounds or damage to his coat.

A couple of days later our shelter manager was checking the lost and found pages on social media and found a picture of Shorti, aka Trouble. At that point, we had another mystery on our hands; the dog was actually missing from his home in Egg Harbor City, a good 50 miles from where he was picked up. We contacted Trouble’s owners and they could hardly believe that he could have ended up in a town so far away. Apparently, during the fireworks, he had forced his way out a window by pushing through the side panel of a window air conditioner. Although the location in which he was found remained a mystery, it did answer the question of how he sustained his injuries.

Trouble may have had a run of bad luck but somehow this little dog was VERY fortunate in the end. He managed to avoid more severe injuries from his fall, survive the streets, be safely dropped off at the police department and still be reunited with his family after being spirited quite a distance away from his home. His escape is the perfect example of how terrified and desperate pets can become during the fireworks. There’s no way his family could have imagined that he would make an escape through such an unlikely egress, but I guess, in his little mind, desperate situations require desperate measures.

Let this also be a reminder to have your pets microchipped, then at least they can be returned very quickly should they pull off an escape.

Source: Fireworks created some trouble for this dog far from home