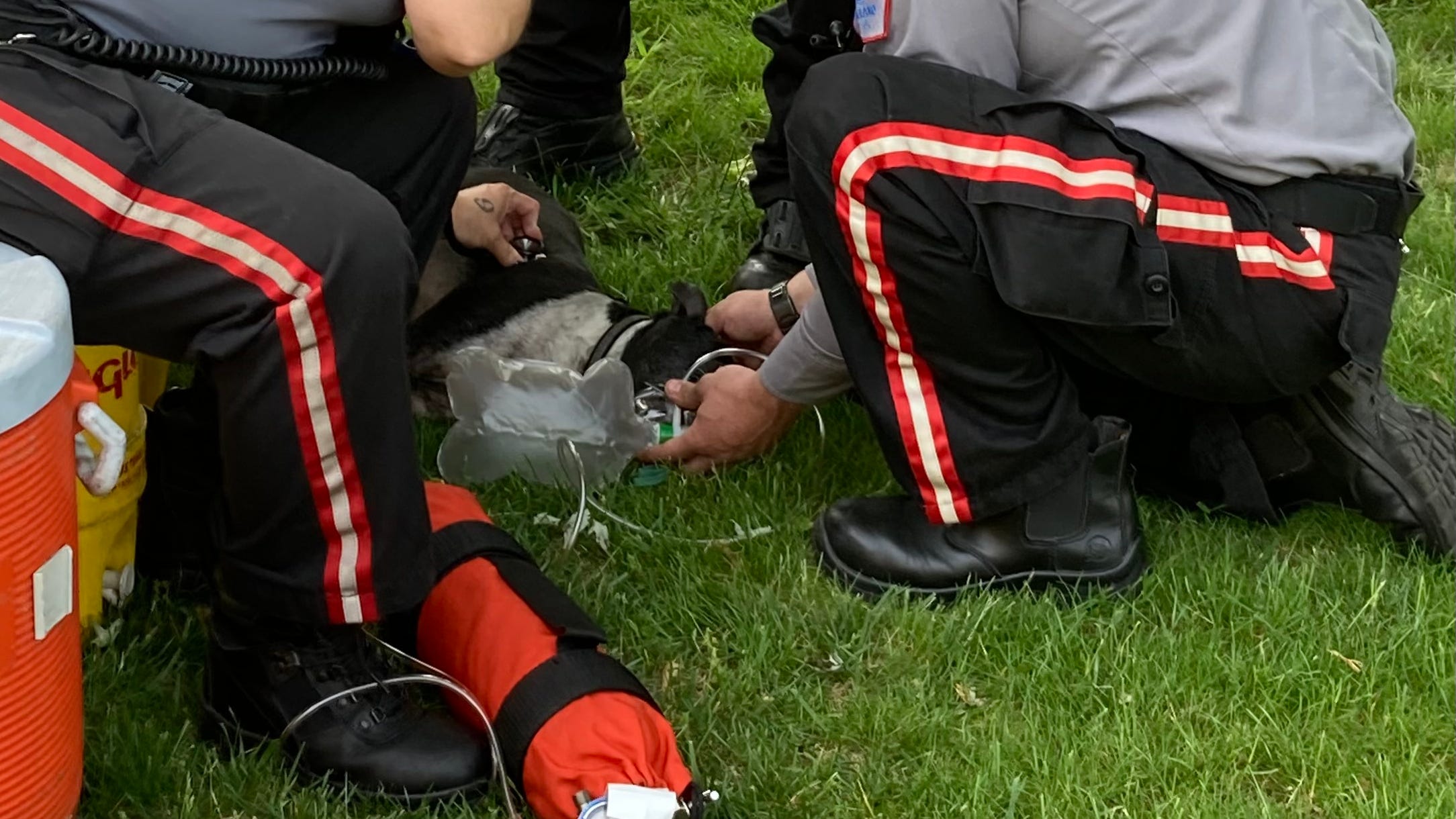 VINELAND – When fire erupted at his Franklin Drive kitchen last week, Jason Earl tried to save his home and his dog.

It took the help of first responders and little miracle to do both on the afternoon of May 18.

After exhausting two fire extinguishers, it was time to flee but Earl couldn’t find Ruger, his Boston terrier, in the smoke-filled residence.

When firefighters arrived to stem the fire, Earl, physically restrained from reentering the house, pleaded with them to find the pet.

During a sweep, firefighter Philip McMahon located the 8-year-old Ruger unresponsive in a hallway, scooped him up, and raced him outside to the front lawn where EMTs began lifesaving measures.

Improvising with a child’s oxygen mask, EMTs placed it over the dog’s snout and gently rubbed the length of the his, torso coaxing Ruger to breathe.

Only then, at his family’s urging, did Earl consent to board an ambulance. He was admitted to Crozer Chester Medical Center where he was treated for a respiratory condition and minor burns to his face and chest.

On Thursday, Earl received a text with a photo showing Ruger on the mend to encourage him with his own recovery.

Rick Earl, Jason’s dad, pledged $130 to purchase a pet oxygen mask kit for the Vineland first-responders to equip them for future pet rescues.

The kits, packed in emergency carryalls, include three sizes of face masks and air tubing specifically for animals. The devices may be disinfected and reused.

Rising to the challenge

Pet first aid is not included in the EMT training curriculum, she said. Several first-responders have taken courses, including those who may have pets of their own.

The Ruger save comes during the observance of National Emergency Medical Services week. This year’s theme is “Rising to the Challenge.”

Where the improvisation worked, the specially designed pet masks are the optimum device, Soracco said. The cup-shaped masks, equipped with a flexible rubber ring, fit snuggly over a pet’s snout to deliver oxygen more effectively.

There are limited supplies in use.

Robert Dovi, the chief/OEM at Medford Township Department of Fire and EMS, said they carry pet oxygen masks aboard all their ambulances and two of their engine companies.

“We carry these kits so we can provide oxygen to cats, dogs and small animals,” he said. “For a lot of people, these pets are their children, and the loss of a pet can be devastating.”

About a year ago, Jim Scott of Medford EMS used a pet mask for the first time to revive a kitten pulled from a burning home.

“The kitten actually went limp on me, so I did heart compressions and got it back,” Scott said. “It started meowing, so we were good.”

The Vineland Fire Department has two pet oxygen mask kits but did not have one on the trucks responding to the Franklin Drive call, firefighters said. They would welcome more devices.

There is way the community may help.

How to save a pet's life

About nine years ago, a Laurel Lake mom and son launched a project to equip fire trucks with the pet-saving devices. They were inspired after viewing an online video of firefighters using a pet oxygen mask to revive a pet.

“I liked it, so I decided I wanted to raise money for it, to get one for our department,” said Shawn Ronan, the namesake son of the Laurel Lake Volunteer Fire and Rescue Co. fire chief.

“We just told everyone that we were doing a fundraiser for pet oxygen masks,” said his mom, Michelle Ronan.

They launched their campaign to equip fire trucks, which are traditionally the first apparatus to arrive at fire scenes.

“That’s the good thing about us being so involved in the fire company — we would know that’s how it works,” said Michelle Ronan, the Laurel Lake Volunteer Fire & Rescue Company secretary.

“Anytime somebody said they wanted one, he said, 'Let’s go give it to them,'” she said.

They’ve distributed more than 30 Wag'N O2 Fur Life Kits and hosted a pet first-aid course at the Laurel Lake fire house. The kits have gone to just about every Cumberland County Fire Department as well as some in adjacent counties.

“We just combine all the money and buy as many masks as we can afford,” she said, handing them out to those in need.

It’s grassroots, no overhead, get-the-job done effort. The campaign doesn't even have a name.

“I didn’t want it be an organization doing it, it’s just me and my mom,” Shawn Ronan said.

Pet masks are distributed to nearby companies that voice a need.

“I grew up in Camden County, Clementon,” Michelle Ronan said. “I still have family that lives up there. We would definitely not have a problem taking them up there.”

But time is limited. Ronan is preparing to graduate Cumberland County Technical Education Center next year. The gifted welder plans to join the U.S. Air Force.

With her only child going out on his own, Michelle Ronan will have some time to fill.

“I helped him get this thing going,” she said. “It will probably continue on, it will probably be something to help me with the empty nester syndrome, because I’m sure I will have that.”

If donations keep coming in, Ronan said she'll make sure the pet oxygen kits keep going out to departments that need them.

Mark the donation "Pet Oxygen Masks" in the memo line. If you are requesting the pet mask on behalf of the Vineland Fire Department or another specific South Jersey department, you may also add that to the note.