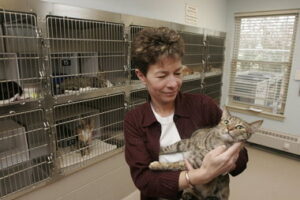 VINELAND — Bev Greco is the executive director of the Cumberland County Society for the Prevention of Cruelty to Animals (CCSPCA), which runs a shelter and adoption center on Delsea Drive in Vineland.

Her office recently became involved in an investigation into a fatal pit bull shooting that occurred during a burglary last week in Bridgeton.

Q: We regularly receive updates and surveys regarding child welfare in Cumberland County, but, as far as you understand it, how are animals doing in Cumberland?

A: It’s very hard to answer that question because animals don’t have voices. The number of cruelty cases reported over the past few years has declined slightly, but it’s difficult to ascertain whether that’s because less abuse is taking place or because it’s better hidden. I think in general that the public is much more aware of animal welfare, and they have become much more likely to report abuses. I also think that the people in Cumberland County know that we (the CCSPCA) have a very strong and active presence and that we respond and enforce everything that is within our power. On the down side, I worry that those offenders of animal cruelty laws take more pains to conceal their abuses because they know they will be prosecuted.

This is why it’s so important for people to speak up and report any suspected violations. Our first course of action is to investigate, educate and improve the lives of all the animals in our county. You may be the only one advocating for an animal at risk — step up and let us at least do everything we can to protect them.

Q: What’s the biggest challenge you are facing right now at the CCSPCA?

A: The CCSPCA has two main functions. One, to act as a law enforcement entity within Cumberland County, and two, to shelter stray and unwanted animals from our county, as well as any other municipality in the surrounding area that contracts with us for animal impoundment.

In regard to our biggest challenge in law enforcement, it would be the lack of resources, including funding from any government entity.

As the severity of cases has increased over the years — acts of violence and the prevalence of blood sports such as cock fighting and dog fighting — so have the penalty phases for convictions. Preparing cases for court proceedings, especially in more serious offenses, involves a lot of time, manpower and evidence gathering. Since animal cruelty law enforcement is not funded by the government in New Jersey, investigations and prosecutions must be funded through donations and other private sources of funding.

As for the sheltering aspect, the biggest challenge is always the same — getting as many animals as possible successfully adopted into good, responsible homes, and educating the public about the necessity of spaying and neutering their animals in order to decrease the number of animals that are euthanized.

Q: We read headlines all of the time about abuse and crimes related to animals. Can you describe one of the times that made you happy working at the CCSPCA? Any good stories?

A: The only thing that keeps me and any of my staff coming back to work every day is that good things happen every day. No matter what else is going on, animals are leaving our care to go to their new homes, caring people come to our doors with animals that they have pulled off the street or some other dangerous situation, and our volunteers — adults and children alike — show up to help us give every animal we can the chance to have a full and happy life.

Sending these animals home and seeing how much other people care about animals is very rewarding. I think one of the most heartwarming things we see is when our older animals find homes. You would be surprised at the number of people who are willing to take on a senior pet. Yesterday we had a very large mixed-breed dog adopted. He is at least ten, gray hairs running through his entire coat, a little stiff and probably weighing in excess of 80 pounds. All of the staff here were in love with him because he was such a sweet, loving and gentle old guy but we had little hope that anyone would want him because of his size and advanced age. Fortunately, his winning ways and big brown eyes stole someone’s heart and he has been given the opportunity to live out the rest of his days in the comfort of a loving home.

Q: What is your biggest dream for the CCSPCA?

A: My biggest dream for the shelter is that we become financially viable enough through grants and donations to offer free or very low cost spay and neuter services to our residents, and to acquire a mobile adoption van so that we could take more of our animals to off-site adoption events wherever the opportunity arises.

Q: After seeing all of the terrible things you have seen as part of your job, regarding abuse to animals, how do you decompress at the end of the day? How do you keep going day after day?

A: I think I answered the latter earlier, but when I go home at the end of the day I am more than happy to spend time exercising, playing and settling in with my own animals.

They take such pleasure in anything you do with them and any attention you give them. It’s impossible to watch them play and not smile. Knowing that I can at least give my animals the best in life gives me a lot of comfort.