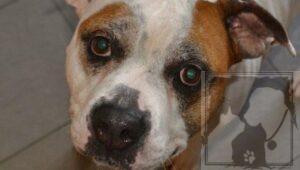 Things at the South Jersey Regional Animal Shelter certainly did go off with a bang over the holiday! As expected, we became inundated with stray animals. As I mentioned in last week’s column, the Fourth of July is typically very busy for us, with pets becoming displaced during backyard parties and  running in panic from the tremendous noise and vibrations of the fireworks. It must have been a banner year for celebrations, because by noon the shelter began filling up.

New arrivals at the shelter are kept in an intake area, which typically provides plenty of room for animals brought in by animal control officers (ACOs) when the shelter is closed. After receiving a heads-up from one of the ACOs that space was getting tight, I stopped in around 3 in the afternoon to see if I could move any of the animals out of intake, knowing that the fireworks were yet to take their toll. I expected to walk in and find a bunch of big, goofy yard dogs that had jumped at the chance to escape through a gate accidently left open with the arrival of the partygoers but, much to my surprise, it was a completely different lineup.

In the first cage was a very scared Bichon mix who stood trembling like a leaf in the outside area of his kennel. He was too afraid to come to me at first, but stood yawing and doing a little stretch that told me that he wanted help but was just too afraid to ask for it. Within 10 minutes, we were best buds.

In the next cage was a Cairn Terrier that was instantly thrilled to see anyone who was willing to pay him attention. I could tell instantly that he was too ornery to be afraid; he was just out for a good time.

The third cage was more of what I had expected to find: a larger, mixed-breed male. He was NOT happy to see me, and he let me know it before I even got in front of his kennel. The next cage held a pug mix whose owner had been arrested and hauled off to jail. That poor little guy was neither happy nor sad to see me; he had more of that “Yo, what just happened here?” look to him. The kennel after that held a sawed-off little Miniature Pinscher/Yorkie mix? That’s truly a wild guess as far as breed mix, but he’s an adorable little guy – black with brown markings, with wiry hair and very short legs. Finally, our last little prize was a tiny, female Yorkie who was very excited at the prospect of having someone to pick her up and cuddle her. I’m truly surprised that she was ever out of anyone’s arms long enough to get lost.

After moving several of our newcomers into other kennels, I thought we would be ready for whatever the night would bring. Needless to say, I didn’t try to move the big guy who was feeling a little cranky about his stint in the pokey, but the other kennels were emptied for the next wave.

The next morning, they were all filled up again, which was no surprise. The thing that shocked me was that the big dog who had given me so much attitude was the first one to be reclaimed, and he turned out to be a total sweetheart after mom and dad showed up!

When I came in to the shelter on the 4th, I had hoped to be able to identify the owners of some of the strays so that I could contact them, possibly get some of the dogs out of there and, if nothing else, relieve the people that their pets were safe. Not one of those dogs was wearing an ID tag … just sayin’.