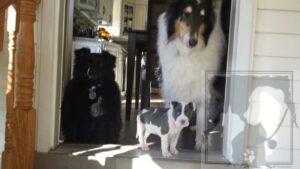 Sometimes they come in droves, sometimes they come in dribs and drabs; this winter the puppies have come in one or two at a time, usually with a couple of weeks in between. When ‘Amazing Grace’ came to us seven weeks ago I had just come off two unsuccessful attempts to save infant pups. So many times when infants are somehow separated from their mothers within the first few days of birth, there is an underlying health issue that doesn’t reveal itself right away. Having lost the other pups, although I didn’t hesitate, it was stressful taking Gracie on, especially with her two brushes with death within the first week. Once she got past that though, she grew and matured beautifully.

Having published her story, the little pup got lots of attention and inquiries about her progress and her adoption status. The first people that contacted me just happened to be within our own foster network; having seen pictures and read the story of Gracie, they were immediately smitten with the tiny pup. They had been checking in with me regularly and last week they asked if they could finish out her fostering until she could be officially adopted. Even knowing what a wonderful home she was going to, it was really hard to let her go. Having ministered to her every need, carrying her around like a human baby and suffering the emotional ups and downs of her infancy, our attachment to her was intense. In the long run though, it was best for Gracie to go before she became any more entrenched in my family and best for us so as not to become even more invested in her. In order to be a successful foster home, you have to be able to give them up when they are ready for adoption, otherwise you end up with too many of your own and not enough time or resources to help those in need.

And so, last Saturday, we made our bittersweet goodbyes and Gracie was off to her fur-ever home. She’ll back to be spayed in a couple of weeks and then her final adoption will be complete. I am happy to report that she has a new best friend, a very active young dog named ‘Tucker’ that was much in need of a playmate, and Stogie. Her new family fell in love with her before they even left the shelter with her and our little miracle girl has a wonderful life ahead of her.

As I said, Gracie left us on Saturday, and then, before I had even had a chance to put all her ‘baby gear’ away, along came the next needy little soul. A very nice lady from Fairfield walked into our lobby with what looked like a baby groundhog at first glance. She had found the little pup crossing the very busy Route 49 all by himself on Saturday afternoon. ‘Wiley E.’, as he was affectionately named by our vet techs, is just a little puff of fur that looks like a cross between a coyote and a groundhog! Scared to death and too young to be in the kennels, I once again ended up with a foster pup. Fortunately, this little guy is about eight weeks old and will be ready to be adopted at the end of the week.

There are many people that fear that they would not be able to foster animals because they would be unable to give them up when they are ready for adoption. As difficult as it is sometimes, it is stories like that of Gracie that make it all worthwhile. Saving her life, witnessing her progress, seeing her go off to a loving home is all the reward I need to keep my ‘revolving door’ open to whatever comes my way. How about you? Call Jess at (856)691-1500 ext. 115 for more information on becoming a pet foster parent.