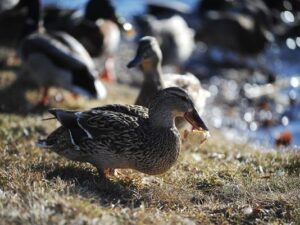 The South Jersey Regional Animal Shelter often receives injured and infant wildlife, especially in the spring and early summer. These animals must be transferred out to licensed rehabilitators and rehab centers that are overseen by the New Jersey Division of Fish and Wildlife. Once in the hands of rehabilitators, these animals are assessed for their ability to recover and be released back into the wild, or euthanized because their health is such that they cannot recover sufficiently to be reintroduced to their normal environment.

There are also some opportunities to house special-needs animals  at refuges, but these are few and far between. Infant animals, according to species and maturity, can often be saved. “Pinkies,” infants that don’t have fur yet, can be difficult because they require a huge time commitment for feeding and because they miss out on the natural antibodies that they normally would get from mother’s milk. Squirrel babies are generally very hearty and fare well; bunnies, on the other hand, are fragile and most often don’t survive.

If you find wildlife of any size that you feel requires assistance, you should check with your local animal control officer or a Fish & Wildlife officer for advice before you do anything. You are also welcome to call the shelter so that we can refer or facilitate some sort of help.

Last week, we sent one of our staff members to a seminar given by one of our local rehabilitators on safely transporting injured animals. Part of the discussions dealt with the nature of injuries commonly reported, one of which caught my attention but actually isn’t an injury at all.

Angel wing is a deformity suffered mostly by aquatic birds, such as geese and ducks, that are malnourished. What is surprising is that this is believed to be caused by an excessive intake of carbohydrates and proteins, often provided by humans in the form of bread. Although the small birds that we feed in our backyards are typically picky about what they eat, ducks and geese are not. In parks or other areas frequented by well-intended people bringing their bags of leftover bread, the birds will fill up themselves up on it, but the bread holds no nutritional value for them.  On any given day, a walk through Giampietro Park in Vineland will most probably reveal birds that have a wing sticking out at an odd angle rather than lying flat against their sides. Sadly, this often results in the bird being unable to fly and therefore unable to defend itself from predators, dodge vehicles or move with the flock.

Spring is the time of year that many people get themselves up off the sofa and out of the house for a nice walk, so let this serve as a reminder to leave the bread at home. Feeding wild birds is often prohibited. But, if there are areas that allow it, you can still enjoy doing so – just bring the right food. Raw seed, cracked corn and chopped-up fruit are just a few healthy foods that are easy to pack and that will be nutritionally valuable to the birds. And by the way, whether you feed the ducks or not, if you walk your dog in the park, keep him leashed and away from the birds; it’s not fair to the birds and it’s not safe for your dog, especially with geese and swans.

Source: Here’s why you shouldn’t feed bread to ducks