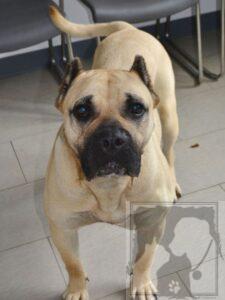 A couple of weeks ago on one of our many, many rainy nights of late, the Vineland animal control officer got called in to pick up a dog from one of the local hotels. A guest of the hotel had called the police station reporting that a dog had wandered into their room. The dog is a roughly 100-pound Mastiff mix. I don’t know all the details of the story, but great skeptic that I am, it’s a little hard for me to imagine that an animal of this size would just slip into your room – at least not without a smidge of panic or pandemonium. The fact that the hotel guests had been evicted from their home only added to my skepticism.

Holly has also been in the South Jersey Regional Animal Shelter for a couple of weeks now, and no one has come looking for her; odd that no one would be looking for this big, beautiful pup. She is a fantastic dog – wiggly, happy, ready to please and very smart. She’s built like a bull, but is gentle as a lamb. She was obviously well-fed and, given her disposition, I would say that she also was well-loved. I would guess that she is simply a victim of her owners’ circumstances, resulting in their inability to keep her. Whether she actually belonged to the hotel guests or she really was a stray that wandered in, the fact that she was in good condition when she was picked up tells us that she didn’t suffer the deprivations that many stray animals endure before they are picked up and impounded.

Holly looks as though she is a Presa Canario mix, a type of Mastiff that originated in the Canary Islands. They are thick, powerfully built dogs that initially were used to work livestock. Holly would be a BIG addition to someone’s home, both in size and personality!

On nearly a daily basis, we get calls at the shelter from people needing to give up their animals because they are moving and cannot take them to their new home, or because they are being evicted and have no place to go. Many teary goodbyes occur in our lobby as pet owners surrender their beloved companions. There are also many cases where animals are brought in as strays, only to find out later that it was the owner who called animal control and reported their own animal as being a stray.

I believe this was most probably the case with Holly. Her owners found themselves with their backs against the wall and were desperate to have someplace for the big dog to go. Although we can’t condone this type of thing, Holly is one of the lucky ones. She was not left somewhere to roam the streets, where she may have been injured, nor was she left without shelter or food. Had her owner surrendered her legally, though, Holly would not have had to sit in the shelter for her legal seven-day stray hold. We could have put her up for adoption immediately and saved her the stress of an extended kennel stay. We could have gotten information on her personality, routines and general history, which would help us to know how to place her in a home that she would be most suited to.

But that’s water under the bridge. Holly is here now and she needs a new home. Anybody interested?

Source: Holly showed up at a hotel; now she needs a home