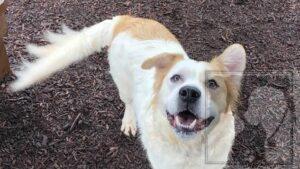 There's a line from an old song from the late 1970s that goes "Oh Lord, please don't let me be misunderstood."

If "Flash," one of our long-term residents here at the shelter could verbalize, he'd be singing that tune.

He's a young, gorgeous mix breed that most certainly has some type of herding dog in his genetic makeup. 2019 was quite a taxing year for this guy; we're hoping that the new year brings him better things.

His saga started last year on Valentine's Day when he was brought in as a stray by the animal control officer. A month later, he was adopted to a family who lived in downtown Bridgeton. He's not a city kinda' guy. The yards in the area that he went to are the size of a postage stamp, not really suited for a high-energy dog that needs a job to keep him busy. He was returned within a few days because his boredom got him into trouble.

To our relief, it only took a few days for him to be readopted. This time he went to an active household with kids and dogs and a little more elbow room. For six months things seemed to be going well, but then he was returned once again. This time he had gotten over excited when someone came to the door and had nipped his owner on the finger.

Most herding dogs will sometimes nip at a person's back, feet or heels. Essentially, they're trying to herd you, and they're mimicking the livestock herding behavior they were originally bred for. I have had Old English sheepdogs for many years now and although mine haven't nipped, they will take a visitor's arm or sleeve in their mouths and bring them to me; this being another typical herding behavior.

Herding dogs were specifically bred to protect their charges, whether it be a flock of sheep or their human family; it's what they are designed for. Lassie was the classic version of a herder that was fixated on protecting her family. Flash screwed up when he got over excited and although his nip wasn't intentional, it landed him back here at the shelter.

In December, we sent him to a big adoption event we participated in and he was scooped up on the first day by a couple that had another herding dog. We were so excited! Flash loves to play with other dogs, so he would not only have a buddy but he would also be with people that had an understanding of the breed. Wrong again ... he was returned shortly after that because the dogs liked to roughhouse and it was too much for the couple to deal with.

So here we are, nearly a year later, still seeking a permanent home for this poor, misunderstood guy. He has never given us a lick of trouble here at the shelter. He's young, he's strong, he's very smart and he definitely needs to go to a home that understands the herding mentality and can give him the physical and mental exercise that such a dog needs.

He would be a great dog for agility training or to have as a jogging partner or as a working dog on a farm. He's very intelligent and with some training and the right person or family, he's sure to be a great pet. It's sometimes hard to display an animal's best traits in the confines of a cage or kennel, but we are holding out hope that someone will recognize what a diamond in the rough this handsome guy is. Maybe he'll be lucky enough to find his forever home before another Valentine's Day passes us by.