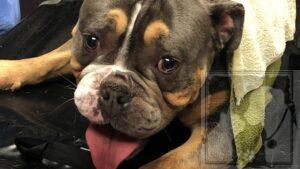 VINELAND – The dog days of summer are taking their toll on local pets prompting local shelter officials to issue a warning.

“People drove up here, they had him in the car,” said Bev Greco, the shelter’s executive director. “The woman ran in, and we sent out technicians out right away.”

The distressed dog had wandered into a Meadow Drive yard, not too far from Romano Park.

“When animals overheat, like with this guy here, their breathing is really super rapid,” Greco said, noting it appears the animal is hyperventilating. “Their gums and their tongue get blood red.”

The English bulldog mix is a brachycephalic dog, meaning it has a “pushed in” snout which can aggravate breathing issues.

“His temperature was so high it wouldn’t register on the thermometer.” Greco said. That meant the dog’s temperature, which should be about 102 degrees, exceeded 107.

“This is the second dog within a week,”’ Greco said.

With the National Weather Service calling for a heat index value reaching 100 on Tuesday, the animal advocate is worried other pets may be at risk.

The stricken canine was brought into the shelter, where technicians tried to calm him and lower his temperature. Heat stroke can cause organ damage and death.

“We got him stable quickly,” she said.

SJRAS called the East Oak Animal Hospital in Vineland to arrange to transfer the dog. The veterinarian staff said they were treating a cat for heat stroke.

“If people have an animal that they feel is overheating, one of the things people notoriously do wrong is put ice water or ice packs on them,” Greco said.

That causes the pet’s temperature to plummet too much, too fast.

Instead, place lukewarm/cool towels on the pet’s ears, belly, and paw pads.

“Once you get their temperature down to 104 (degrees) then it’s a process to cool them the rest of the way,” Greco said, it must be done in stages with the animal still at risk for stroke.

When located, the dog’s owner said the pet was let out of the house but wasn’t sure what happened nextr, Greco said.

At the vet’s office, the dog started having seizures and was transferred to an emergency clinic in Cape May County, she said.

If someone spots an animal in heat distress, call the police, the SJRAS officials said. The Delsea Drive shelter does not have an onsite veterinarian and immediate care is critical.