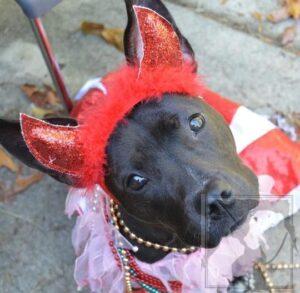 Life as a pit bull can be a very rough road; being used in blood sports, over breeding, life on a chain, irresponsible owners ... they

are the breed most likely to be abused and neglected. It hasn't always been like that; loyal companions that they are, they used to be police, therapy and service dogs. They were war heroes and movie stars. Now, they are often feared, reviled and shunned.

In 2007, National Pit Bull Awareness Day was established in an effort to help educate people about the many positive aspects of the breed and the difficulties they face in today's world. This special day has turned in to a month-long campaign to help bring their plight to light. Shelters across the country are filled with them. Young and old, pristine puppies and scarred up adults, full of energy or beaten down from life's challenges; they fill the kennels and cages in animal impound facilities throughout the nation.

Finding adopters for these dogs can be extremely challenging. Public perception can be very negative. Pits are sensitive, social dogs that can suffer depression when kenneled for long periods of time. They're smart dogs that need people, they need exercise, they need mental stimulation - all of which make shelter life difficult for them. Unless they are young pups, they tend to sit in the shelter for long periods of time before homes can be found, so it's especially rewarding when one of our long-term pits finally gets their big break.

Last week, we were thrilled to send "Lime Pie", a pit bull that had been at the shelter for almost five months, to her special home. As a 5-year-old pit bull, the odds were stacked against her, but finally, after 145 days in the shelter, she's has a family and a place to call home.

Originally found as a stray in Hopewell Township, she came into the shelter with a high fever, skin infections, intestinal parasites and heartworms. She was a wreck, but would quickly become one of our shining stars. She was highlighted in the newspaper multiple times. She was showcased at events at Petsmart and National Night Out. Her pictures and story were plastered on social media sites. She was taken for walks at Parvin State Park and sleepover weekends by our volunteers; we were trying every possible way to find the person or family that would appreciate what a peach this girl is.

Last week a couple and their two children came to look at a particular dog that had been adopted shortly before their arrival. The man is a disabled veteran and he, his wife and two kids were looking for a four-legged friend to complete their family. After spending a little time with Lime Pie, they knew she was the one. They had already completed their application process, the dog was fixed and ready to roll; in a matter of 30 minutes or less, Lime Pie's world was full of new promise and new possibilities.

It's especially fitting that Lime Pie would finally, after nearly five months in the shelter, find her forever home during Pit Bull Awareness Month. The story of her beginnings is all too common for dogs of that breed; the outcome is something to be celebrated.

During the month of October, all pit bull-type dogs at the shelter are 50 percent off adoption fees and the selection is wide.