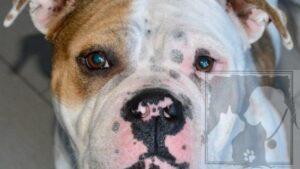 While the Carolina wren who made her nest on my porch isn't a shelter animal, I'm guessing that those of us who love shelter pets also find room in their hearts to love the wild creatures that surround our homes. If you are anything like I am, these creatures become familiar faces, like Fluffy and Skinny, our squirrels, and Bill and Becky, our chipmunks. My daughter has also assigned names and personalities to various birds, like the robin named Robiela, a blue jay named Bobo, and of course, Carolina, the Carolina wren.

We noticed nesting materials on the porch a few weeks ago and soon after a messy nest appeared in a basket of pansies right next to our front door. It was such an eyesore that I went to clean it up one day and had the scare of my life when Carolina flew out and immediately began reprimanding me, quite loudly. We were able to sneak a quick peek and found four perfect little eggs.

We decided to sacrifice the pansy basket so as not to disturb the nest. Our "quarantine" mornings typically involve a cup of tea on the porch while we watch the birds and we came to "know" Caroline quite well. She began to trust us enough to go in and out of the nest while we were sitting only a few feet away. I could recognize her call from the house and was always relieved to see her tending so well to her nest.

But yesterday morning, her cries were frantic. A blue jay was on the porch, inquisitively looking directly at the nest. I scared him off, knowing jays can be opportunistic and will eat eggs. I knew that since he had identified the nest, it was only a matter of time before he came back, but I had hoped that maybe we could continue to scare him off and protect the nest. It was not to be; the next time I checked on the nest, all the eggs were gone. Carolina was gone.

Honestly, I'm way more upset about this then I probably should be ... and I realize that it's probably an extension of everything else going on in the world. What I had hoped would be a beautiful beginning was not to be. I felt like I had failed to protect her and her eggs, even though I knew that realistically there was nothing I could do to keep the blue jay away all day and night long. It was one more layer of pain, on top of layers that had already built up - a layer of seeing how difficult it is for some people to wear a mask to protect others, a layer of 100,000 deaths from COVID-19, a layer of healthcare workers struggling, and now many layers of deep pain over the tragic police-involved death of George Floyd.

However, today I awoke to a familiar noise - Carolina's noisy corrections, directed towards a chipmunk (not sure if it's Bill or Becky?) who was eating out of our bird feeder. Right next to her, was her partner. They stayed for a little while, then flew off. And with that, there is hope - maybe not for the nest on my porch, and certainly not for the poor basket of pansies, but for another nest, maybe a safer nest, at another time.

Source: Layers of pain in life with a promise of hope in nature