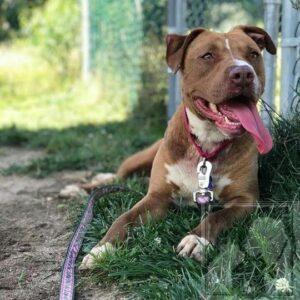 Prometheus is a figure from Greek mythology, whom among other things, was credited with stealing fire from the gods and giving it to humanity thus enabling the progression of civilization. It may therefore seem ironic that we would give that moniker to a cat that was set on fire by some supposed greatly evolved inhabitants of our current society. Evolution, progress, education, refinement and compassion seem to have passed over some humans.

Bev Greco, Executive director at South Jersey Regional Animal Shelter, holds Prometheus the cat. The feline was set on fire but is making a full recovery and will soon be up for adoption. (Photo: Adam Monacelli/Staff Photographer)

A citizen of Millville brought in our Prometheus as well as a mother cat and three kittens from the Oakview Apartment Complex. She was beside herself because after hearing a cat screaming in pain, she had found Prometheus with half his tail burned to a crisp and part of his back and right ear singed. She also had found a dead kitten that appeared to have had its neck snapped. She was told that kids in the complex had been tormenting the cats. Animal control was off duty so she gathered up the cats and kittens she could get a hold of and brought them into the shelter.

Apollo, Cronus and Helios are very lucky little felines. The three 9-week-old kittens somehow escaped the fate of their dead litter mate. Although they were suffering severe intestinal parasites upon arrival, they have recovered nicely and seem unaffected by their difficult start in life. In spite of the abuse, there had obviously been someone kind and nurturing in their young lives as they are very sweet and seek human affection.

Their mother was named after another figure in Greek mythology, Gaia, who was known as the ancestral mother of all life. Our Gaia is a gorgeous Siamese mix that was adopted as soon as she became available. Let's hope the rest of her family are just as fortunate!

When Prometheus was brought to the shelter, all that was left of the last half of his tail was about six inches of black, desiccated bone. The veterinarian removed all of the dead bone and tissue and he has been recovering comfortably. He is a very handsome large tabby with a big square head. He will now be further distinguished by his 'abbreviated' tail. Thank goodness for the kindness and compassion of the citizen that did what was necessary to get him and the other four felines out of their perilous situation.

The investigation of this despicable act of cruelty is in the hands of the Millville Police Department. Anyone having information about the case should call the police station and ask for the humane law enforcement officer on duty. If in fact it was juveniles who killed the kitten and maimed Prometheus, they will not stop at that. The propensity to commit cruelty to animals in children is a proven precursor to violent acts towards people.

If you or someone you know has information about this case, please help the authorities identify the perpetrators so that there can be some chance at intervention before their violence escalates. If on the other hand it was adults that committed this offense, the crime is now at least punishable with jail time ... too bad the punishment doesn't fit the crime.

Source: Looking for those who burned one kitten, killed another