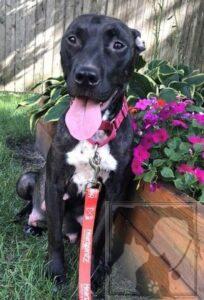 It’s not unusual for animals to find den-like enclosures to hide in when they are threatened or feel insecure. Such was the case back in August, when Millville Animal Control brought in a Staffordshire Terrier mix who was found hiding under the porch of an abandoned house. The animal control officer immediately could see that the dog was alone, afraid, extremely emaciated and very pregnant. Not only was she seeking safe shelter for herself, she also was preparing a den for her pups.

Once she arrived at the South Jersey Regional Animal Shelter, the veterinarian determined she was due to deliver any day and that it was urgent that we try to get weight on her. An animal shelter is no place to give birth, especially for an at-risk pet, so Haley was moved into a foster home right away. Sure enough, a few days later, she gave birth to five adorable puppies. Thank goodness no owner came forward, because this poor girl deserves better than what she had endured and we are free to find a home where she will be loved and cared for.

Fast forward eight weeks …. Haley’s puppies will be heading to their new homes within a couple of days. As soon as her puppies were posted online for adoption, the applications came pouring in! Everyone wants an adorable puppy … but what about Haley? It seems no one wants their mom. Not a single application has been submitted for the one most in need.

Haley’s foster family has cared for multiple moms with puppies over the years and sees that this is a common theme. The last mom dog in their care took nearly a year to find a forever home. So many people rush in to adopt an adorable puppy, but little or no attention is paid to the moms left behind. Interesting enough, though, those mom dogs are rarely ever returned adoptions. However it’s not unusual to have a puppy returned after a year or so, most often because “they are too much” once they grow up. Puppies are a blank slate; it’s up to the adopters to mold their behaviors, much like raising children. Adult dogs, on the other hand, are pretty much a case of “what you see is what you get.” Adopting an adult dog takes the guesswork out of the equation; you know their size and temperament right from the start.

At only 2 years old, Haley has endured a life that clearly hasn’t been kind to her. Even the move to her foster home was traumatic, because she had hardly moved in and gotten to know her new caretakers when she delivered her pups. New moms are always frantic to protect their babies, and this poor girl was already confused enough having found herself in a whole new world in a matter of a few short days! It took her a few weeks to gain trust in her foster family, but once she did, she transformed into a fun and playful dog who can’t seem to get enough love.

Haley’s foster mom has been working with her since the beginning to help her learn what life is like when you’re a beloved pet – not a discarded dog that no one had loved or cared for. Haley weighs 42 pounds. She’s not the type of dog who needs to be the life of the party; she just wants to be someone’s faithful companion. Here’s hoping that special someone comes looking.

Source: Mama dogs at South Jersey Regional Animal Shelter: Where is the love?