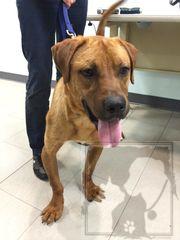 VINELAND – A trio of pups, rescued from a dog meat farm in South Korea, have flourished in foster care and are now ready for adoption.

Beth, Regina and Amos arrived at the Cumberland County Society for the Prevention of Cruelty to Animals about a month ago.

Now, they are ready to move on.

The SPCA is looking to place the dogs in homes with an abundance of patience and love, said Jessica Morrison, the shelter’s foster coordinator.

Applications may be submitted by clicking here.

“This is not going to be first-come, first-served, we are going to go through the applications to really identify what’s best for each dog,” Morrison told The Daily Journal.

The pups were among 485 dogs brought to the United States and Canada as the Humane Society International leads an effort to end the practice of raising dogs for food.

The rescued dogs arrived mid-April at St. Hubert’s Animal Welfare Center in Morris County and were transferred to the local SPCA on May 9.

Underfed and fearful, the dogs required time to adjust to life beyond the cage, Morrison said.

Experienced foster families stepped up to ease the dogs into their new lives.

Regina, believed to be a mastiff/blood hound mix, is a 60-pound puppy, according to her foster mom, Kristin Ramer.

“Practically everything is brand new,” she said. “If you’re patient and give her a little time, she comes around pretty quick.”

“She didn’t know how to drink out of a water bowl,” Ramer said, but Regina is learning. “She likes belly rubs and squeaker toys.”

Beth, a small spaniel mix, takes time to warm up to people, said Karen Mayo, who was filling in for a foster mom. But when she does, she becomes a furry shadow of the subject of her affection.

Amos, who enjoys the company of other dogs, is a quick learner but not without a few missteps.

“He tried to a walk on a mud puddle,” said Jill Baxter, but he soon learned not to do that again. “He’s very clever.”

Amos, a mixed breed, didn’t bark and Baxter wondered if the dog had sustained a throat injury.

“Then he saw my horse, he opened his mouth,” she said. “He is very sweet, he puts up with everything. I have not seen him snarl or give a dirty look the whole time I’ve had him.”

Amos is a homebody.

“He doesn’t want to leave the yard, he’s getting used to the car, that’s a big deal,” Baxter said.

“I think it was a huge success; they’ve all done better than we expected,” Morrison said, crediting the foster families for the level of care they provided. “I think (each dog)  got exactly what they needed.”

Their once jutting rib and hip bones were no longer visible, now hidden under some healthy weight gain attributed to regular meals and treats.

Each dog carries scars of the deplorable conditions where they were raised.

Regina and Amos have splayed feet from living in a wire-bottomed cages. Initially, they weren’t familiar with grass and didn’t know how to run.

When they did try, their gait — while enthusiastic — was awkward.

“The first time, (Amos) started to run, oh my God,” Baxter said, admitting she thought he was injured. “The more he runs, the better he gets, he’s going to be an athlete.”

The dogs may have some vision problems and there are dental issues. Amos’ teeth push on his side lip, which gives an appearance of an Elvis sneer.

The dogs are getting used to American life.

Beth likes to cuddle up and watch television.

For those who are interested in adopting one of the dogs, Morrison said, “Do the application online.”

“That will give us the basic information about them,” she said.

Interviews will be set up to talk to prospective adopters about the dogs’ likes, dislikes and quirks.

“We want them to be prepared for what they may come up against,” Morrison said.

Once afraid to leave their crates, Amos and Regina are curious, led by their noses to new discoveries.

Beth, the youngest and most petite, remains shy with strangers.  She did open up to her foster family and did eventually enjoy some cuddling.