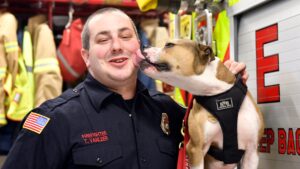 MILLVILLE - A member unlike the Millville Fire Department - or any other in the country for that matter - has ever seen is set to join the ranks here this week.

Millville on Friday will officially welcome to the department 4-year-old Hansel, a pit bull seized in Canada during a 2015 dog fighting sting.

Hansel, who comes to Millville by way of the Throw Away Dogs Project, will be the first pit bull in the United States certified in arson detection, according to the rescue.

Hansel and his handler, Millville firefighter Tyler Van Leer, started work in October on a 16-week class to ready the duo to implement a series of new skills for the department.

Van Leer, who owns three dogs, seemed like a natural fit to take on the K-9 handler role for the department.

The firefighter did admit to being a bit surprised when he learned he'd be working with a pit bull, but he and Hansel have quickly formed an inseparable bond.

"To be honest, I thought I was going to get a Lab or something like that," Van Leer said. "I was like, can a pit bull really do arson detection? And he absolutely can. At first, my curiosity was piquing and as soon as I saw his drive and the way he wants to work, it was a no-brainer from that point on."

Hansel has quickly become a hit at the firehouse thanks to his calm demeanor and loving attitude.

"His personality is A+," Van Leer said of Hansel. "He's definitely my boy. I love him to death. He's super sociable. He loves kids. He loves being around other people, and especially other dogs. He loves to be loved and just loves to work.

"Every time I put his harness on he knows we're doing something work-related," Van Leer continued. "He just does laps in his crate, so excited, wags his tail, and no problems whatsoever."

Tyler Van Leer of the Millville Fire Department and Hansel pose for a photo on Tuesday. Hansel will be the first pit bull in the United States certified in arson detection, according to Throw Away Dogs Project. (Photo: Adam Monacelli/The Daily Journal)
Millville Fire Chief Mike Lippincott said bringing a K-9 on board is something the depart
ment has "discussed for a number of years."

The chief is happy to have Hansel, and even ordered him a badge that is expected to arrive shortly.

"The Millville Fire Department is very excited about adding a K-9 Accelerant dog to our fire investigation capabilities," Lippincott told The Daily Journal. "When this opportunity presented itself it seemed like the right time to move forward."

According to Carol Skaziak of Throw Away Dogs Project, Hansel already has been taught to detect 14 odors, including gas and flammable liquids, linked to arson that will help in criminal investigations.

Skaziak said Hansel spent a year with Throw Away Dogs Project in 2018 training to become a K9 working dog.

In September 2019, she met with Lippincott regarding matching the department with Hansel.

Tyler Van Leer of the Millville Fire Department and Hansel pose for a photo on Tuesday. Hansel will be the first pit bull in the United States certified in arson detection, according to Throw Away Dogs Project. (Photo: Adam Monacelli/The Daily Journal)

"We invested a lot of time meeting with all parties involved including Police K-9 trainers and all agreed this was fantastic opportunity to do something good while also greatly increasing our fire investigation capabilities," Lippincott said.

Hansel will be available to assist other area departments in arson investigation and the department plans to bring him into area schools to help with fire prevention awareness.

For Skaziak, Millville's willingness to put faith in a pit bull is a major step forward in advocating for the breed in K9 roles.

"We need more department chiefs to be open to putting these amazing dogs to work on their force," she said.