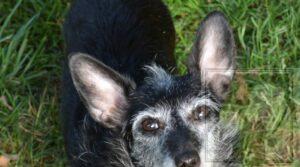 One of the most rewarding things about my job is getting to foster animals; as hard as it can be to let them go, it's truly a joy to help them grow or recover until they're ready for adoption.

Right now I'm caring for a mother and pups that came in as a result of police investigation for non-animal related issues. There was a total of 17 animals on the property, including puppies and kittens - all of them surrendered by the owners. Although the health of the animals is relatively OK, their housing and sanitary conditions were unsatisfactory.

When the animal control officer pulled up to the shelter and opened the van doors, one of the crates held a small black and white terrier that was frantically trying to protect her infant pups. She was barking, growling and spinning in the crate, desperate to keep her babies from harm.

Imagine having a baby just a few days old and having your space invaded by strangers and then you and the baby being whisked away in an unfamiliar vehicle; it was no wonder that she was so upset. The odd part was that although she was barking and growling when anybody got near her crate, she was directing her aggression at her tail rather than at any person; I knew from this behavior that she meant no harm to us, she was just worried about her pups.

To spare her as much anxiety as possible, we got her health check done quickly and I took her home where she could have peace and quiet. As I suspected, once she was settled in a safe place, she came to me with a wagging tail and lots of kisses.

"Abby" and I became fast friends, but for two weeks she did not want me to pick up the babies if she was in the weaning box with them. The funny part was, as long as she was outside the box, I could pick them up, love and fuss over them without even a sideward glance from her ... go figure!

When we first laid eyes on Abby, we got a real kick out of her unique appearance: short legs on a long body, grizzled black and white fur that make her look older than her sixish years, long snout and big pointy ears! I thought her look was very unusual but I had a real surprise when I walked into our local Petsmart last week - right over the main entrance is a huge photo of a dog that looks exactly like her with the exception of a little brown on the coat of the Petsmart model.

Abby is a fantastic mom that never tires of taking care of her brood. We were told that the father was a Chihuahua so the pups should remain quite small. At two and a half weeks of age the runt, "Oreo", weighs just a half a pound and the big guy, "Bruno", weighs a pound and a half. Those two are white with black markings, "Coco" is white with brown markings and "Arlo" is white with grey markings.

We are watching "Oreo" closely as she has the domed head that is common in Chihuahuas. She has an open fontanelle (skull plate), again common in Chihuahuas, which in normal cases can take two to six months to close up. She's my favorite of course. Her tiny head was the size of my thumb when she first came and now, because she's smaller than her littermates, she is quicker and more agile and fun to watch as she ambles around their little enclosure. I can't wait until their little personalities start to shine through!

They should be ready to go to their new homes at the end of July, so check in with us if you're interested. And please don't forget Abby. She's a precious little girl that deserves a nice life with people that love and cherish her.