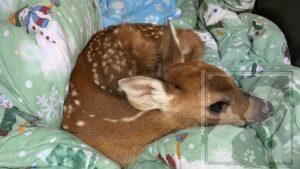 Our world may have come to a relative standstill, but Mother Nature is still busy at work. Here at the shelter, 'She' keeps up busy with all sorts of new life - the fuzzy and feathered being our specialty.

It's been a challenging season thus far because many of the normal support systems for pets and wildlife in need are not in normal working order. It had been a very slow start to kitten season because the animal control officers were limited to emergency responses only; but as kittens show up in the yards and sheds of our community, the dams have burst and the kittens are pouring in.

Along with the kittens, we've had a sudden rush of infant wildlife appear on our step. One of the most interesting was an 8-week old bald eagle that had been dislodged from its nest. Still a couple of weeks away from fledging, I was shocked to see the size of the young bird; he was huge, and already magnificent even at his tender age. The folks at the avian center were hopeful that he could be placed back in the nest within a few days so that he could fledge normally with his parents.

Late one evening last week I got a call from an animal control officer who had been called out for some sort of animal in a local resident's backyard. The caller first thought it was a rabbit, but as he got closer, he thought it was a tiny calf; turned out to be a week-and-a-half-old fawn. The animal control officer took a late night run to a local goat farm for milk and I ended up making a drug store run for a baby bottle!

She was a gorgeous fawn in excellent condition - no ticks, clean coat and clear eyes. Her mother had been hit by a car the prior night so the poor little thing had been on her own for about 24 hours. Once I got her settled we attempted to give her the goats milk, but she wasn't much interested in having anyone push the bottle in her face. After many subtle attempts to get her to drink, we ended up getting some honey in her mouth which she seemed much more amenable to.

Young bald eagle apparently fell out of its nest.

The next morning we were no more successful with the bottle but were off to Cedar Run Wildlife Refuge up in Medford to get her some professional care. Cedar Run is a wonderful organization that takes infant, injured and ill wildlife and rehabilitates them to be released back into the wild. They also have a great education program and nature trails. Although the education program is suspended due to the virus, the trails are still open and the birds and animals can still be viewed; it makes for a nice little day trip and the organization is very worthy of support.

Along with those two special guests, we've also had baby groundhogs, bunnies and many different types of birds common to the area. Keep in mind that if you find any of these type creatures in distress, call for help before you touch them. Every situation doesn't necessarily require intervention. Feel free to give us a call or call Cedar Run for advice before you touch or move the animals. As with most other businesses, staffing during the shutdown is short at the refuge and the veterinary clinics that handle wildlife, so resources may be limited, but that won't keep any of us from trying!