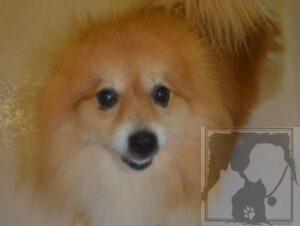 Our Cumberland County SPCA agents worked long and hard to find a particular dog, who we named Calista. They knew she was out there and, after seizing 16 dogs from the same dogfighting property, they refused to leave her behind. It took weeks, but they found her – and suddenly she was ours. She was beautiful: fawn and white and a tiny little thing.

I looked over her body for scars – none.  She approached the front of the kennel with a wagging tail – another good sign. But it was only weeks ago that the Cumberland County Society for the Prevention of Cruelty to Animals staff invested everything – time, energy and emotion – into the rescued fighting dogs who came before Calista, only to have to humanely euthanize them when we exhausted every possible option for safe placement. It was incredibly difficult to go through, and I didn’t feel ready to walk down that road again.

The animals, however, have a convincing way of making their case. All Calista needed was about five minutes in a play yard with our staff. It would have been only 30 seconds, but it probably took us over four minutes to travel a few dozen feet from her kennel to the yard because her leash manners were so awful. She was hyper, and wound herself and the leash around my legs, almost taking me out several times. She likely had never been leash walked prior; her life was spent on a chain. It was a very long, short walk!

Out in the play yard Calista briefly explored, and then immediately returned to the staff members, desperately seeking affection. She sat on our feet and pressed her body into ours as close as she could and looked up at us with longing in her eyes. We melted; we had no choice. After this, we were confident that she would pass any human portion of a temperament test. But the biggest challenge was still coming up.

Of the other dogs that we had tried so hard to save, three passed human handling with flying colors. It was the dog tests that proved to be their undoing. A large stuffed dog was used, as it’s not safe to use a real dog due to the potential for serious aggression. Watching those dog tests was equally horrifying and heartbreaking. As soon as the other dog was presented, a change came over them, their eyes glazed over, and you could tell that all of their nerve endings were on fire. If the stuffed dog was brought closer, they would attack with no hesitation. There was no way to see and hear what was happening without visualizing what happened in the fighting pit. It was a sick feeling. These dog tests were what convinced us that we had to let them go. There was no way they could be safe around other animals; the potential for disaster was just too great.

We were understandably nervous when it came time for Calista’s dog test. We knew that, if she failed, she had no chance. But we were given reason to be hopeful. Calista was young enough that it was a real possibility that she had not yet been in a fight; she wasn’t scarred after all.  And more significantly, when our agents found her, she had gotten loose, and despite the presence of other dogs, there was no altercation. We held our breath as Calista approached the other dog, and I think there was a collective, silent cheer as the meet proceeded without concern. Calista had done what none of the other dogs had been able to do – she passed a dog test.

At that point, things moved quickly. We reached out again to the Humane Society of the United States, who connected us with Heather from Handsome Dan’s Rescue for Pitbull Type Dogs. There were a lot of details to be worked out, especially since the rescue is hours away in Rhode Island. No matter, though – we would do anything to make this work for Calista, and Heather and the HSUS were equally committed. How lucky were we and Calista to have such strong partners advocating for her. There was no better rescue to meet her needs; it has numerous resources and supports, and the staff has experience with rehabilitating rescued fighting dogs. (Handsome Dan himself is one of the dogs who survived Michael Vick’s fighting ring and went on to be a national example of how successful rehabilitation can be.)

Calista is still in the care of Handsome Dan’s rescue, and we love seeing her progress play out on the rescue’s Facebook page. This wasn’t just any rescue; this was the rainbow rescue. After a loss so deep, seeing Calista live the life and have the opportunities that we dreamed about for our other dogs was like the sun peeking through the clouds. It was the reminder that although the sun may set for too many of the victims of dogfighting, the clouds are breaking for many others who are constant reminders of how brightly the sun shines for those we can save.