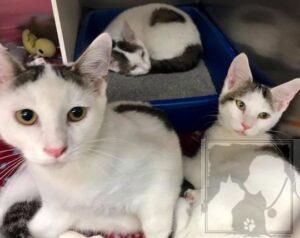 Before I began working at the South Jersey Regional Animal Shelter, I was definitely a self-identified "dog person". I loved dogs, the bigger the better. I had always grown up with dogs and believed that they were far superior to cats. I appreciated cats; I didn't mind them. I certainly

never imagined that I would eventually not only own three cats, but fall head over heels in love with them.

In fact, my first cat I only kept because he was "dog-like" and "looked really cool" (he actually has lynx tips on his ear, his coloring is wild, and he was quite large). At the shelter he would fetch tennis balls and loved everyone, but he was also chronically ill. Fostering quickly turned into adoption, because years ago something simple as chronic upper respiratory infection made a cat unadoptable, and I couldn't bear that alternative after getting to know him. So, he stayed by accident and I now had my first cat ... but I was still a "dog person".

My work at the shelter required me to start spending lots of time with cats. When I was rescue coordinator, I had to figure out which cats would be good matches for our partner shelters and rescues, which required getting to know them. This involved many late nights spent in the cat room, opening cages and getting to know our feline residents. I began to see that each cat had such an individual personality - some who would hop right onto your shoulder, some who made adorable chirping sounds, some who were shy, but so sweet, and some who were true punks. I was falling in love with cats every night.

So, when several years later as I was walking my dog, a cat jumped out of nowhere and began following us home; I opened the door and let him in. He never left!

At this point, my growing appreciation for cats had me welcoming the idea of a new feline companion and since this one had already decided that my dog was his new best friend, I felt that he was meant to be with us. Since then, he has grown into a very large, extremely friendly and playful cat who has made my heart explode with his sincere love for my (human) babies.

My third cat also came along quite by accident. I had just lost the one of the big loves of my life - my Boxer Rosie and there was a huge hole in my heart. That same day, someone brought in a litter of nursing kittens and their tabby mom. Mom was wearing a pink rhinestone collar (but was a stray) and had an ear tip (but was nursing kittens). She was shy, but very sweet and I brought her and the babies home to foster. I fell head over heels for this family, probably because my heart was still healing from the loss of Rosie. The kittens all found amazing homes. But as is so often the case, their mama (named Te-Fiti, after the Disney goddess with the power to create life) received no such attention.

Te-Fiti stayed, and I never thought it would work. Her first meeting with my dog resulted in one extremely angry and terrified cat and one bleeding dog. The next few meetings were equally disastrous. She hid all the time. I can't tell you when it began to change, but I know it took a long time. One day we saw her on the steps, looking at the dog like she wanted to murder him - but staying put. Soon she would venture all the way downstairs, and now here we are today … she is currently sitting across from me, stretched out on the baby's playmat laying in the sun. My dog is in the same room as her. While she's still shy with strangers and definitely the most "cat-like" of my three cats, she is the one who gently paws you for attention as you walk by, or jumps up like a puppy to receive pets, and who head butts you as a sign of her love.

There are two points that you should take away from my transformation story. First, you may be considering yourself a dog person because you have never had the opportunity to truly appreciate cats. And second, for a cat to fulfill their potential, they need a chance and they need time … often lots and lots of time. But if you open your heart and open your mind, a cat (or two or three) may bring you more joy and happiness than you would ever expect!

Source: Never thought I would grow to love cats