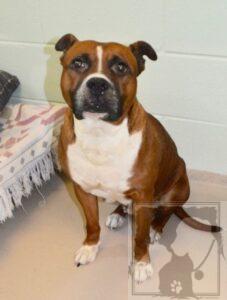 I’m not a big fan of New Year’s resolutions. It seems that once a problem is recognized, we should start taking steps right then to correct it. That said, it seems that just about every year I am thinking to myself that “after the holidays are over” there’s always something that I want to try to improve on. Procrastination wins every time.

I was thinking along those lines in reference to walking my dogs; the month of December holds a plethora of excuses for not getting out there. The mornings are too cold and our bodies haven’t had a chance to adjust to the temperatures. It’s dark every night by the time we get home from work. There are gifts to be bought and wrapped, parties to be given and attended, football games to be watched … the list goes on and on and the laziness sets in. Fortunately, January has been mild so far and walking is at least one thing I’ve gotten better with.

But I was thinking that it would be nice if, just once, my pets would make some resolutions of their own. I would like my little guy, Frankie, to promise me that he’s not going to act like a total jerk when another dog walks by us on a leash. I’d like my sheepdog, Beans, to resolve not to sit in the South Jersey Regional Animal Shelter staff room and try to bum some lunch off every employee she can sucker. I’d like my cat, Shiny, to swear off breaking into cabinets to steal treats and not to terrorize the pet sitter when I’m away. We also have a geriatric pit bull mix, Simone; the most I’d ever get out of her would be the endeavor to sleep 22 hours a day instead of only 20.  But truthfully, she’s so stubborn that there would never have been any acknowledgement of the need for improvement from her, ever, at any age!

I took a walk through the kennels and cat rooms this morning and tried to imagine what our shelter animals would resolve if only they could get into a good home. Delphi has been here since October; she’s a sweet cat who has a lot to say, mostly about having to live at the shelter with other cats. I think she would promise not to talk so much in her new home. Cybil, a mother of six beautiful kittens when she first came to us, would promise to shake off her postpartum crankiness and smile more now that those rugrats are off on their own.

Wanda is a 6-year-old pit mix who has been working on her resolutions ever since she got here at the beginning of November. She was scared and knew next to nothing when she came in but has since learned many commands and good social skills. Her only fix would be to try to stop rolling over continuously in hopes of getting more treats.

Then there is Fozzi, a 3-year-old Lhasa mix who came in a matted mess. One of our staff fixed him up with a cool “Mr. T” haircut and now he thinks he’s too cool for school. He needs to do a little self-examination and amend his bullying ways with his kennel mates. He’s a little egotistical and demanded a kennel suite all to himself. Little body, big attitude …