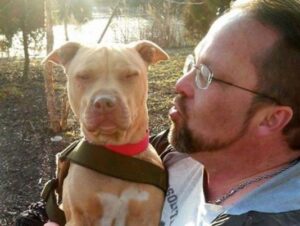 Sometimes we get lucky enough in life to have a “heart dog” enter our lives. Heart dogs are the dogs that fill a place inside you – a hole that you may not have even known needed to be filled. It’s the dog who is your constant through life’s hills and valleys, and the dog who brought something special to life that no other animal, or person, could. This is very difficult to explain, but if you have had a heart dog, you will know exactly what I am attempting to describe.

Recently, one of our staff members lost his heart dog, a dog that he rescued in every sense of the word. I have worked in animal shelters for 15 years, and the story of George and Golden Boy is one of the most beautiful, touching partnerships I have encountered. I can only hope that I do justice in telling their story.

Golden Boy, a 9-year-old pit bull, was rescued by Cumberland County Society for the Prevention of Cruelty to Animals cruelty agents from an abusive and terribly neglectful situation. Although he was skeletally thin, he was found secured to by a heavy chain, huddled on the hard dirt ground. When he arrived at the shelter, he was emaciated, weak and sick.

One particular staff member, George, felt a strong draw to Golden Boy from the day he arrived. As Golden Boy became stronger, he became reactive to almost everyone and would bark aggressively in his kennel. He was impossible to handle. He had so few good experiences with humans to draw from that he found it too difficult to trust most people. The exception to this mistrust was George. George continued to spend lots of time with Golden Boy, and their bond grew. Golden Boy, unfortunately, had to stay in the shelter for months while his case progressed through the justice system.

When the case concluded successfully, George knew that Golden Boy needed a place to go. His behavior made him unadoptable and he couldn’t stay at the shelter. The bond was already so strong that George committed to doing whatever needed to be done so that he and Golden Boy could stay together. He built a gorgeous, heated and cooled kennel for Golden Boy and took him home. Remarkably, Golden Boy quickly adjusted to his kennel and was doing so well that he was brought into the house and became part of the family. He made a flawless transition to being a beloved house dog, even enjoying his Chihuahua brothers.

About a year ago, Golden Boy was diagnosed with prostate cancer. We utilized funds from a Grey Muzzle Organization grant for senior dogs to extend his time and keep him comfortable. The extra months that Golden Boy and George had together were a blessing. Knowing that Golden Boy’s time on earth was coming to a close, George filled their everyday together with love and fun.

In March, Golden Boy passed away, with George at his side. I know how incredibly difficult his loss was and how he has been missed every day since. George is a man of few words, but sometimes a few words are all that’s needed to convey a big message.

I asked him how he and Golden Boy connected.

“Why did Golden Boy and I click? We both needed one another at the time we met. He saved my life and I saved his!”