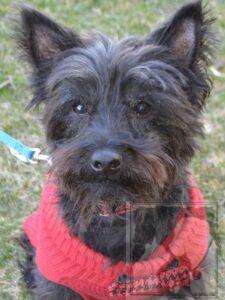 There’s an old saying: Wherever you wander, wherever you roam, be happy and healthy and glad to come home. It is the perfect sentiment for most of the animals that end up in animal shelters.

Their stories may vary, their circumstances may be very different. But in the end, it is all that we can ask for them. Most of the pets that end up here at our facility have come in as strays from the streets of the towns and small boroughs of Cumberland and Salem counties.

But this is the story of one little guy who had a much longer road to his ultimate destination.

Buster is a small Cairn Terrier mix who originally was purchased back in 2008 by a young lady who lived with her parents down in Alabama. Buster’s journey was to start on a bad note because the girl who had purchased him had failed to get the requisite approval from mom and dad before bringing a puppy into the house. At that point, he was placed with a friend for temporary safekeeping until a permanent home could be found. He had been called Biscuit at that time, and eventually was given to a family who also lived in Alabama.

The story gets a bit murky from there, but at some point his new family relocated to New Jersey. In July 2017, Buster was picked up by Millville’s animal control officer and brought into the South Jersey Regional Animal Shelter. He had a 2016 rabies tag that had been issued in Alabama. He had a microchip that was still registered to the girl who had purchased him originally. We were able to contact the original owner to fill in some of the dog’s history, but were never able to find the person or family who had relocated him to Millville, and they never came looking.

We didn’t know the name of our wandering pup when he first entered the shelter, where he became known as Mr. Moppet due to his funny little face and wiry, scruffy coat. He was a big hit at the shelter, and a potential adopter was found immediately. The application was accepted, and Moppet was all set to go home. In the meantime, another potential adopter, Lauren Valentine, had seen him in a Facebook video we posted of our adoption room dogs and she came in to meet him, only to find that she was too late. Despite this, she came back the next day to check on him. He was still here; the family that was supposed to adopt him had not come to pick up him up. The office staff called them and, for whatever reason, they had decided it would not work out for them. Perseverance had paid off, Ms. Valentine brought her other dog in for a meet to make sure everybody got along, and Biscuit aka Mr. Moppet became Buster, and has been such a hit with his new (and permanent!) family that he is now a candidate in our 2018 Dog of the Year Contest.

It just so happens that Buster’s mom has a co-worker who also has a dog in the contest, so I hear the competition is getting intense. The best part is that no matter what dog takes the title, all the animals in the shelter win. That’s what it’s all about, so please visit southjerseyregionalanimalshelter.org to cast your vote.

Source: One dog’s triumphant journey from Alabama to NJ