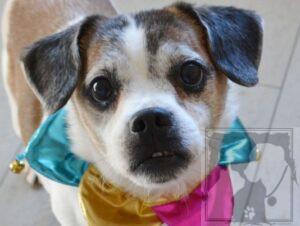 Having pets as part of the family can be one of the great joys of life; it can also present challenges that may be very difficult to meet. Either way, the decision to bring a pet into your home is one that should be made with careful consideration. Last week we had a dog come in that was a victim of circumstances that put her and her puppies at risk; but hopefully, all will end well.

Animal control brought the little mother dog in on Thursday after receiving a call about a dog tied out on a porch. When they arrived they found her on a short leash, tied to the railing with an empty crate next to her. She was full of milk, obviously still in the midst of feeding young puppies. There was a man at the property that stated that the dog was not his. She could not be left out in the cold and at risk of injury from her tethering situation, so the officer removed her and brought her to the shelter.

Twenty-four hours later, no one had called looking for her and we were becoming very concerned about her overabundance of milk which puts her at great risk for mastitis. We also knew that there were puppies out there that might be too young to be eating on their own. It was time to go knocking on doors.

Once we arrived on the property, the story got complicated quickly. The first door we went to was answered by a lady that spoke no English, we got an interpreter on the phone and she then communicated to us that she had seen no puppies but that the mother dog was from the upstairs apartment. We went up the outside stairs and found the leash and crate still on the landing. The door was answered by two ladies, one stating that the dog belonged to her husband and that it was the landlord that had called and told animal control that it wasn't his dog. The puppies, she said, were four weeks old and had been distributed to other people; one to the lady downstairs (yes, the one that said she hadn't seen any puppies), one to someone in Delaware and two to the owner's sister. To the owner's credit, once we explained the peril that mother and pups were in, they had the puppies collected and brought to the shelter within a couple of hours to be reunited with mom.

It appears that the problem began with owner's recent move here from Delaware. Apparently the landlord was not fully aware of the pets that were part of family now renting from him…and his reaction was not so good. Thankfully, when he put the little dog outside, he called to have her picked up right away. The story is far from over as it seems the landlord has relented and allowed the people to have the dog back. We are working with the owners of the mom and pups to help them, hoping to help them get mom spayed and have the puppies placed in responsible homes.

This is the perfect example of pet owners whose living circumstances changed and the challenge of finding a place to live where pets are accepted proved too difficult and ultimately put the dog at risk. In spite of this, the mother is a happy, healthy dog that trusts people completely; it is obvious that she has been well loved. Poor decisions were made, but hopefully with some education and resources we can give this story a happy ending.