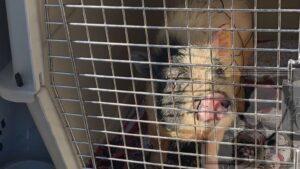 David McClennen of Roosevelt Boulevard did a double take when he spotted the curly-tailed escapee running free near Kickapoo Trail.

"That's the strangest-looking dog I ever saw," he joked.

Concerned for the piglet's welfare, he called in animal control officers Diane Starn and James Branin, who pulled out an array of trapping tricks.

This pot-bellied pig is in the custody of Vineland Police Department's Animal Control Unit after it was spotted running free along Roosevelt Boulevard. Jan. 29 2020 (Photo: Deborah M. Marko)

But the pot-bellied fugitive passed on their potato and apple slice lures.

It didn't fall for the ol' wild pig call app.

After hogging attention for more than 30 minutes, the pig's getaway ended when officers snared it with a perfectly timed net toss. It did not surrender peacefully, protesting with a high-decibel squeal.

"It's hard to say where he came from," Starn said, but added it may be someone's pet due to its familiarity with dog food.

The piglet is now a guest of the South Jersey Regional Animal Shelter, where its owner may claim it.

McClennen, relieved to see the runaway safe and sound, was a cordial host turning to the animal control officers.

Get the Afternoon Briefing newsletter in your inbox.

News you may have missed.