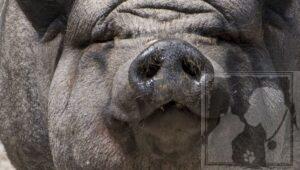 One morning last week, a call came in from an animal control officer who had received a report of two pot-bellied pigs running loose. A citizen had finally corralled them in his fenced-in yard and needed them removed. When the animal control officer arrived on the property, he quickly realized there was no way he could catch the pigs, nor get them up into his vehicle by himself. A couple guys from the road department came to assist but quickly discovered that pigs are smarter than the average bear!

Fortunately, we have a couple of expert pig wranglers on staff at the South Jersey Regional Animal Shelter, and we were able to send them down in a regular van that the animals could more easily be loaded into. It took a few laps around the yard, a little ingenuity, some potato chips, a few beads of sweat on the part of the humans and a lot of squealing on the part of the pigs, but they were finally corralled and moved into crates for the ride back to the shelter.

More than a week later, no one has come looking for them. At this point, one has to wonder if they were simply let go because they outgrew their former owner’s expectations. They’re young pigs, probably about 6 months old, and already weigh 80 pounds. The shelter has dealt with many pot-bellied pigs over the years that have been surrendered by owners who were misinformed about their size and the care that they require.

There are several different classifications of pot-bellied pigs, and many people assume incorrectly that they are all small. In fact, the Vietnamese pot bellies that were all the rage several years ago actually range from 125 to more than 200 pounds! They’re very short, 26 inches high at most, but they are still massive. Just like dog breeds, they also come in toy, teacup and even micro mini sizes. Many pet pigs have been purchased with expectations of a small breed but then end up being much, much larger. Pigs are super-smart, very social, and live an average of 12 to 18 years. Training them is much like training a puppy; you can even take them to obedience school.

In spite of those similarities to dogs, they also come with some difficult challenges when they are kept as house pets. One of biggest issues with keeping one indoors is that pigs are unrelenting in their quest for food. The combination of intelligence and the drive for food means they are very clever in regards to raiding cabinets, pantries and refrigerators. They also like to rule the roost, making it imperative that owners are strict about setting boundaries and enforcing rules. This dominance may cause problems with children, as pigs will want to establish themselves above small kids in the pecking order.

Our two guests were very hospitable and very cute during their stay here. Of course, they were set up in a livestock pen where they couldn’t get into a whole lot of trouble. We are very lucky to have the Freedom Farm Animal Rescue close by to help with our homeless livestock. Jamie and Tara take in all sorts of farm animals from horses to chickens, as well as some companion animals. Many of the animals they take need rehabilitation of some sort; others, like our two girls, just need appropriate accommodations until they can be placed in a permanent home. “Panchetta” and “Chorizo” are livin’ the life out on the farm and will make great pets for the right people, thanks to the Freedom Farm.

Source: Pot-bellied pigs are smarter, bigger than you think