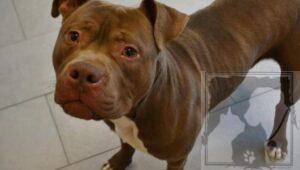 Most of us are familiar with the classic novel “Charlotte’s Web” by E.B. White, in which a young pig named Wilbur, who was destined for slaughter, is befriended by a young girl and a kindly and creative spider. The spider, Charlotte, spun webs with words in them to convince the farmer that Wilbur was an exceptional pig and his life should be spared. Messages like “Some pig” and “Radiant” appeared in her web, and Wilbur’s life was not only celebrated, but spared.

The Cumberland County Society for the Prevention of Cruelty to Animals had a Wilbur, with a story that draws several comparisons to the novel. Named Wilbur because of his adorable snout, our Wilbur was a 60-pound, chocolate-colored mix of pit bull and boxer. He arrived at the SPCA shelter on Jan. 23 after being picked up by animal control. Although our goal from the moment he arrived was to find him a great home, he faced many challenges on his long road that threatened his life, but was also given help from special friends.

Wilbur hung out at the shelter pretty uneventfully for his first few months. Although he was a handful, he won everyone over with his affectionate personality. We did grow alarmed as the weeks went by and Wilbur had no interest from adopters or rescues. By the time April arrived, Wilbur’s stress level was extremely high and kennel space became tight; we felt like our desperate pleas for Wilbur were unheard and, unfortunately, there was no word-weaving spider to be found in his kennel to draw attention to him. Wilbur was timestamped, a term that refers to a time limit placed on a dog or cat before they are euthanized.

It’s important to understand that euthanizing an animal the shelter is always a last resort. Every single staff member who works at the shelter is there for love of the animals; euthanasia is something we dread and do everything we can to avoid. But as an open-intake shelter, sometimes it is unavoidable. When space has to be made for incoming animals, there is no good choice. When an animal’s quality of life has declined and no help is to be found, there is no good choice. A timestamp is a final chance to find help that we already had been desperately seeking.

Wilbur was lucky and received an adoption application, but only a few short weeks later, Wilbur was returned to the shelter. He was too much for the family, and Wilbur was again in limbo. He was timestamped again – dogs were pouring in and there was no space. At the end of the timestamp, there was no interest in Wilbur, but we had moved over 10 dogs into rescues, so we were able to give him more time. However by the next weekend we had received notice of 20-plus dogs on a property in Bridgeton that we would be taking in, and once again Wilbur found himself with a timestamp. The rollercoaster began again.

Hours before his timestamp was up, someone put in an adoption application, but that night they withdrew it – they weren’t as prepared as they promised me they were. I felt despair. Despite all our efforts, I thought for sure Wilbur would be gone in the morning, and it was extremely painful. While he had many online followers who were quite passionate about him, the shelter staff and volunteers were his caregivers. We were hands-on with him, dealing with the bruises his bad manners left yet seeing his potential when he flopped over for belly rubs. No one could feel the high of thinking he was saved or the low of imagining holding his sweet face while he passed like the people who were with him every day.

Wilbur somehow managed to get incredibly lucky again: A local young woman, with the experience he needed, offered to help him and actually showed up prepared to do so. The pieces finally fell into place for Wilbur – a dog meet was successful, TLC Rescue agreed to take him into its care, and his new foster was all set to take him home.

Wilbur is alive and thriving in rescue today. He will be ready for an adoptive home once he decompresses and completes his training. We are extremely grateful for Madeline, who took on the task that no one else would: bringing him into her home and taking on his training. Thank you to TLC Rescue in Millville for taking him into its rescue and providing support for his new foster mom. A special thanks to the volunteers and staff members at the shelter who spent months refusing to give up on Wilbur and making sure that he received the exercise and enrichment he needed to make it out.  Although Wilbur has moved on, we will never forget him. That Wilbur, he sure is “Some Dog.”

Source: Rescue of a lifetime for Wilbur