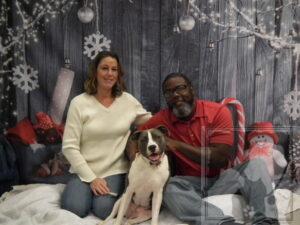 Sadie, a blue nose pitbull, sat between Santa Claus' legs posing ever so gingerly and looked up at the camera.

The photographer, trying to capture the perfect Christmas shot, blew into a whistle - making a goose noise - to get Sadie's attention long enough to snap the photo.

Photos with Santa are just part of the holiday tradition for most pet owners, who spoil their furry friends for the holidays. In fact, 77% of pet parents plan to include their pets in their holiday traditions this year, according to a survey by Rover.com, an online marketplace for pet care services.

This was Sadie's first time meeting and taking photos with Santa at the South Jersey Regional Animal Shelter in Vineland.

Her owners, Millville residents Sean Mitchell and Kami Hutton, have had other dogs in the past but never brought them to meet the man in the big red suit.

"She's a great dog," Hutton added. "I always took the kids for pictures, but never the dog."

For Halloween, Sadie wore a witch collar for the ghoulish holiday. But for Christmas, Mitchell and Hutton plan to make the holiday special for their pooch.

This is the first year the couple is buying Sadie gifts for Christmas, so they're unsure how much they'll spend.

"It depends on what I see and what I like," Hutton said with a laugh.

On Christmas morning, Kira, a Pembroke Welsh corgi, will wake up to her own stocking with dog toys and treats. She, along with a cat in the home, will open their gifts first, said Vineland resident Trisha Pedersen, Kira's owner. Pedersen said she spends about $50 on Christmas gifts for Kira.

"They're a part of the family," she said of Kira. "She's my little child. It just makes me happy to make her happy."

About 80% of pet owners plan to buy their four-legged friend a gift for the holidays, according to the Rover.com survey. Of those gifts, 51% are toys and 30% are treats, with two-thirds of pet parents hanging a stocking for their pet.

In fact, 1 in 5 pets receives more holiday gifts than other members in their human family, according to the survey.

When it comes to spending, 55% of pet owners plan to spend $25 or more on their pets this year.

Even the Santa taking the photos with the pets at the South Jersey Regional Animal Shelter in Vineland believes pets are a part of the family.

This was Bruce Compton's second year portraying Santa at the shelter, but he's been a Santa for pets, and only pets, for about 10 years. When he's not dressed in a red suit, he's a volunteer at the shelter.

"I feel more comfortable with pets," he said. "It makes their families just so happy. For the shelter cats and dogs, it gives them a chance to get out and be seen. For people, it gives them an opportunity to have their photos with their family."

And offering holiday photos with pets makes everyone feel included.

"It's just nice to have an option," he said. "You can't take them to the mall, a lot of places won't do pet or animal pictures."

Kelly Serbeck, a shelter employee, said the shelter takes Santa photos for both paying clients and in-house animals "to not only highlight them for adoption, because it turns out to be a great picture, but it also gives adopters a chance if they already missed the (photo) dates when they adopt."

"That way they already have their first year's Santa picture," she said. "And hopefully they'll come back in future years."

She also thinks pets should be included during the holidays, although she believes the canines enjoy the festivities more than the felines.

The cats do like clawing at Santa's beard, though, she added.

But it's not just dogs and cats who meet St. Nick.

"We've had a pony one time dressed in holiday gear," she said. "We've had iguanas, we've had people bring fish, ferrets, goats. We have a chicken coming later today."

And she's glad to have Compton as Santa because he knows how to handle the variety of animals that come in.

"Anybody can hold a kid," she said. "And, really, what's funnier than seeing a dog with antlers?"