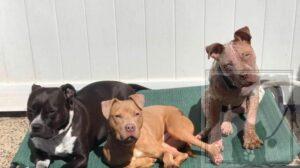 A couple of weeks ago, I told you about a dog named Arnold that had come into the shelter with Demodex mange. Suffering a terrible skin infection and unable to walk more than a short distance because of his severely swollen joints, it was heartbreaking just to look at him. You might think seeing Arnold would have prepared us for what was to come, but sadly, one week later, we would be sickened by another horrible case of neglect.

On the first day of May, along came Mario, Luigi, Bowser, Daisy and Princess Peach. Vineland Animal Control called to let us know he was heading our way after responding to a report of a litter of five Cane Corso mix puppies that were abandoned by the sewage authority's compost dump. Five six-month old puppies with severe Demodex mange, skin infections, swollen joints, secondary entropion (a condition of the eyelid folds inward onto the surface of the eye) and corneal ulcers had been dumped on the side of the road along the fence line of the compound. Fortunately, a concerned citizen on the way to work in the industrial park had spotted them and gotten them out of the road.

Like Arnold, their fir was nearly gone, their skin was on fire, blood was oozing from the wounds caused by their own nails as they tried to scratch at the maddening itchiness. Luigi's eyes were mere slits from his swollen lids and the pain from the ulceration caused by his eyelashes being rolled back, scratching the surface of his corneas. They lay as a lethargic pile of pups, scared, in pain, huddling together for support. Our instinct to stroke and pet them for comfort had to be checked as they cringed and their skin twitched from irritation of a simple touch.

Now, let's fast forward two weeks from when Arnold first came to us. He is now recovering beautifully with his buddies at Dog Town Rescue. Feeling significantly better from all the vet care and TLC he's been getting, he was whining and crying to get out and interact with the other dogs. His caretakers were reluctant at first, not wanting his tender skin bumped or scratched, but his persistence finally paid off and he was allowed to join in his first play group. His recovery is ongoing but he has proven himself a true diamond in the rough.
And now, let's fast forward 10 days from when the puppies first arrived. Mario is up and running with his foster family brothers! He adores the two Shepherds, and although his clumsy limbs keep him a step behind, he's doing his best to keep up and wagging his tail from morning til night. Luigi, who was in the worst shape of the group, is constantly seeking affection, playing with his human and canine foster siblings and even learning to do steps. Bowser has progressed so far out of his lethargy that his favorite thing now is playing on the trampoline! Princess Peach has mastered chasing and fetching the ball. Daisy has gone from shrinking back to the touch of a hand to jumping on the sofa for some cuddle time with her foster mom.

Once again, we want to thank all of you who have stepped up to help our pets in need; these six dogs will go on to live happy lives because of compassionate people like you.