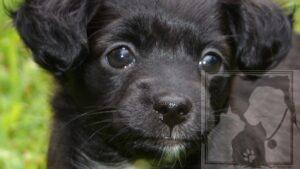 One of the highlights of my career in sheltering has been the opportunity to foster puppies. Watching them grow and develop, seeing their personalities emerge and nurturing them until they’re old enough to go to their permanent homes is one of the things that makes this work so rewarding. I have had them at all stages; mothers giving birth in my home, mothers that have come in with pups not yet weened, litters of all ages with no mother, single puppies that have somehow become separated from their pack.

Fortunately, there have only been a few that could not be saved due to some health issue. My current litter is my first experience with a pup having any kind of disability; but it only makes me love him more.

One month ago, the shelter got a call from a family in Bridgeton that had found a mother and pups in a box in the city park. Someone had abandoned a small Spaniel mix with a pair of tiny, two-week-old puppies. It seemed odd to me right from the start because the mother, whom we’ll call Molly, was extremely friendly, a little on the chubby side and had a luxurious, long, black coat. She exhibited none of the normal issues seen in abandoned animals. Although she could have benefited from some orthodontic care in her youth, she is as adorable as they come; those crazy, crooked teeth only making her more endearing. She’s a fun dog that loves people, has a spirited sense of adventure and is truly going to be the joy of someone’s life.

Molly came with her two tiny pups, one black like her mother and the other as white as they come.  Curled up in their bed, the contrast in their coloring, the pups were dubbed Yin and Yang. We noticed immediately that Yang, the little white pup, had pink eyes. We thought he might be albino, but the vet saw signs of some emerging color in his irises.

Now, at six weeks of age, the blue in them has become much more prominent. We feared at first that he might be blind, but his eyesight has improved as he has developed. He is somewhat visually impaired, but he doesn’t let it hold him back! He tries desperately to run along with the other dogs and does a pretty good job of keeping up with them. He has become a little more independent but still relies on his mom and sister when venturing out of familiar territory. He’s a lover boy, lavishing attention on anyone that picks him up and holds him.

Yin is like a little clone of her mother, same coloring, same high spirits, smart as can be and just as nibby! She loves the great outdoors and is determined to put every leaf, twig and blade of grass into her mouth and carry it around. Yin loves to run, although her stride is more like a hop at this age. It’s one of the cutest things you’ll ever see. She and her brother are great companions, sleeping together, playing together and sometimes, like siblings will do, beating each other up!

The two pups are not completely weened yet so it will be a couple more weeks before the trio are all ready to go. We’re hoping to find an active family for Molly. She is very happy to sit and snuggle with you on the couch. But, she also loves to walk, play, meet people and explore new things.

We would very much like to see the puppies go to the same home as Yin will do best with another dog to help him navigate the world. Being with his sibling would also make the transition to his new home much easier. Yang needs somebody to play with and to help keep her out of trouble, her brother has proved he’s up to the task!

It’s hard to believe that someone could have abandoned this little family like they did, thank goodness they were rescued before anything bad happened to them. Now it’s time to find them the loving homes they deserve and to make some lucky families very happy with their new pets! If you’re interested, visit sjras.org and complete an adoption questionnaire.