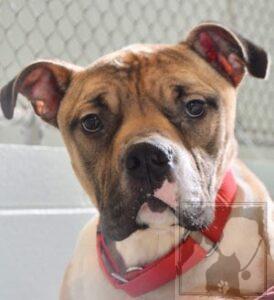 Technology can be a blessing and a curse. There are times when I would like to take my computer or my cell phone and lay it out in the middle of Delsea Drive to be squashed into smithereens by the passing traffic. There other times when I think of how convenient it is to have the world at our fingertips; as long as you have Internet, that is!

Anyway, one of the things that we felt it was necessary to install at the shelter were cameras in various areas for security and safety purposes. Recently, when our vehicles were vandalized to the tune of $1,100, the cameras failed to pick up anything, but this past week, when a dog was abandoned at our door, we had much better luck.

Last Tuesday night (Nov. 24) about 10:45 p.m., someone in a white pickup truck with a cap dropped off a dog in a crate. The note on the crate said, “Found him in this cage on West Ave please find good home!.”

The crate was just big enough to hold the dog, but not large enough for him to stand up in. The bars of the metal cage were rusty and caked with dirt. A chain leash was hanging from an inside corner. It held a crunched up tin roasting pan, a smattering of kibble and a blanket that smelled to high heaven.

Gobbles, as he was aptly named for the season, was found by the first staff member to arrive around 6 a.m. Nov. 25, that next chilly morning. Cowering and shivering in the darkness, he was timid but wagging his tail as he was approached. Once the crate was inside, we opened the door and he walked out and went right up to the staff member happy to receive some attention.

He was fine until he felt the tug of a leash around his neck; whatever the poor dog has been through, the leash is a terror for him. Our technician soothed him for a minute and then the dog allowed himself to be picked up and carried back to the kennels without the slightest struggle.

He’s a 51-pound bag of bones in what should be a 70- to 75-pound body. He has big pressure sores on his haunches from lying on hard surfaces with hip bones protruding. He was suffering from ear infections. His skin was dry and flakey, his coat patchy and crusted, and his legs were stained with urine. Oddly enough, he is neutered, which means someone, at some time, cared about him.

The image included along with this column is of the person that abandoned Gobbles with the pickup truck in the background. We would appreciate any information about the incident be passed on to us or the Vineland Police Department. To provide information about Gobbles, call (856)691-1500 or email adoptions@sjras.org.

In the meantime, ‘Gobbles’ is recovering from his physical woes, gaining weight, happily sitting on the laps of staff members and learning that the leash is not a bad thing. We hope to have him in shape for adoption very soon.