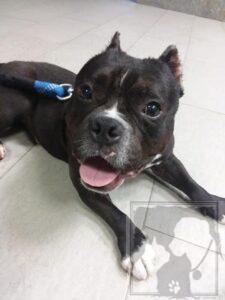 Back in July 2020 this column told the story of Ninja, a dog that had been held in the shelter for 238 days pending animal cruelty charges against his owner. I explained how this sawed off, squat, little bully breed mix had fallen through the cracks of the justice system, prolonging his impoundment at the shelter for an interminable seven months. I was beside myself with frustration that this poor dog had to suffer the circumstances of his owner’s neglect and was now a victim of an inadequate legal process for humane law enforcement cases. Little did I know that we would spend yet another six months waiting to learn his fate.

In July I explained how there was confusion as to where the court case would be heard because the dog was picked up by Animal Control in Upper Deerfield because his owner had originally given a non-existent address in Bridgeton, but said the dog had been living with his sister in Millville. But her address turned out to actually be in Vineland, and that’s whose court the case was finally remanded to.

Sadly, through a series of missteps from the initial police investigation through the prosecution process, Ninja spent from Nov. 22, 2019 through Dec. 16, 2020 in the shelter before the county prosecutor’s office stepped up and obtained custody of the dog from the former owner.

When he first came in, the dog was wobbly, sometimes dragging his stubby back legs, indicative of some type of neurological problem. His front legs were a little deformed, he had multiple wounds on his face, legs and torso, which were at various stages of healing. He was suffering all sorts of internal and external parasites; ear mites, fleas, hook, whip and round worms.

He was an absolute mess from the combination of terribly poor breeding and physical neglect.

From a behavioral aspect, he was just as much a wreck. He was difficult to handle at first, charging after his caretakers and attacking their feet and ankles. He became a project for the kennel staff as they slowly earned his trust.

In order to treat his initial and ongoing medical needs, it was imperative that he allow us to handle him.

Due to the issues with his legs, he also had to be carried out of the shelter onto the grass for exercise and breaks from the monotony of the kennel. Eventually, he made his choices about who he would allow to pick him up, medicate and even give him affection.

Those chosen few he let hold him like a baby in their arms, put booties on to protect his feet from sores he would get from dragging his impaired legs around and take him outside to rub his belly in the soft grass. Everyone else he kept at bay with some animated growling and when he was having a good day with his legs, the occasional charge to the front of his kennel.

In spite of his lameness, he even managed to bite the ankle of one kennel attendant and partially rip the top off of another one’s work boot. His trust of people was limited and the mental frustration of being cooped up in a kennel day after day only made it worse.

Finally, though, after all of the trials and tribulations that this dog has endured during his initial years and after 414 days of impoundment, Ninja is going to go to rescue in a real home. He will be provided with care, behavioral training and the chance to adapt to living life as a real pet.

Will he succeed after being dealt such a lousy hand in life? Only time will tell, but one thing is for sure; the system failed him and this cannot happen again. His chances for success at adjusting to a home environment would have been much greater had he not spent more than a year caught up in a legal system not yet prepared to handle the challenges of humane law enforcement.

The powers that be in Trenton must be moved to allocate resources to provide comprehensive training to law enforcement, staffing for enforcement agencies and advocacy programs for animals caught up in abusive and neglectful situations.