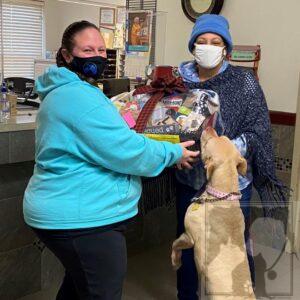 South Jersey Regional Animal Shelter’s first Operation Outreach project has come to a close, and we are excited to share our winning family. There were many great entries, but one family in particular exemplified the strength of the bond between pets and people. And their beautiful story together began right at our shelter.

Athena had been bounced from several homes and was having a tough time in the shelter kennels.  Being in the shelter is a stressful situation for any animal, but some in particular have a lot of difficulty adjusting to the different smells, the noises, and despite our best efforts at enrichment, exercise, and tender loving care, it’s just not home.

Athena struggled, and as her stress increased, so did her need for the perfect home.

Athena’s luck finally changed when Valerie came to the shelter looking for a family dog. She had just adopted three family members, and being adopted herself, adopting a rescue dog was the only option. Valerie’s family met Athena on Tuesday. Valerie couldn’t forget her beautiful eyes, and what felt like an instant bond. On Friday, at a time when she was desperate for one last chance, Athena went home.

Athena bonded with her entire family, giving them strength to get through difficult times and providing love and support as their world changed. Athena finally felt safe and she in turn lifted the spirits of her family.

But this isn’t the end of their story, just one month shy of their one year “adopt-a-versary”, Athena slipped through a gate and swallowed a toy. She became ill and was brought to the hospital where it was determined that she needed surgery. However, surgery is expensive and her family worried about how they would be able to provide her with the care she so desperately needed.

But as family and friends learned about what had happened to Athena, donations began to pour in to support her care. Athena was able to have the life-saving surgery and made a full recovery.

Today, she remains the best thing that happened to her family. Valerie insists that she did not rescue Athena, Athena rescued her and her entire family.

Athena’s family in turn has stood by her and not given up when things were difficult. She had severe anxiety when she was adopted and this resulted in intense chewing. Anxiety in a dog can be very difficult to manage, and some families may have given up on her.

In fact, before she was adopted by Valerie, she had been given up on by two other homes. But not Valerie, she refused to give up and her family worked with her to help ease her nerves, using essential oils and supplements and a strong support system that allowed her to finally relax and become more trusting.

We are happy to end this year by honoring Valerie and Athena with a special gift basket that we hope they can enjoy together this holiday season.

Congratulations to the runners-up, who also received gift baskets: Carol Dolson and her Great Dane Rylie; and Courtney Burkey and her two Great Pyreneses, Shyla and Sierra.