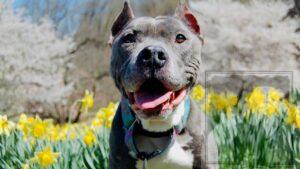 Nine years ago, Animal Control and former Cumberland County SPCA cruelty investigators met a dog who, on that day, would begin a journey that would transition him from a neglected and heartbreaking abuse case to an amazing dog who changed the world.

Nine years ago, Alfie was emaciated. Hip, spine, and rib bones stuck out through sparse blue fur, ending in sores that were bleeding and painful.  If you looked closely at the fur, it almost appeared to move on its own. Because 100s and 100s of fleas were crawling on his body and sucking the life from him, tormenting him and making him weak.

Alfie was a creature in desperate need of help.

Those nine years ago, he was brought to the shelter (now the South Jersey Regional Animal Shelter) for care, the first necessity being a bath. He was gently washed by the hands of the investigator who rescued him. The visual of the clean water instantly turning bright red and running down the drain, as the blood-filled fleas were finally washed away, was an awful sight to see but it was a visual representation of his old life being washed away, a clean start beginning.

Although he was so weak and sick, Alfie showed us his true colors in those first hours together. He was gentle and tolerant, even grateful.

While our love for Alfie was very real, we knew he needed more care than we could offer and days later Sherry and her daughter Annie arrived to take Alfie home. Although Sherry was picking him up as a foster, it was clear immediately that there was a special connection. It was not a surprise, but a welcome announcement when Alfie was adopted by Sherry and her family not long after.

This could be a happy ending right there. Alfie received so much love and top notch veterinary care and made his family so happy.

But that is only the beginning for Alfie. Now established as a healthy, family dog it was time to share his good fortune. We will forever be grateful to Sherry for not only seeing Alfie’s potential and loving him as he so deserved, but for sharing his gifts with the world.

People were drawn to Alfie, and kindness and serenity radiated from him and gravitated to people who needed him most. To say that he had healing powers is not exaggerating.

Alfie earned his canine good citizen certification, went on to become a certified pet therapy dog, won a pet therapy Dog of the Year Hero award and has numerous letters of appreciation and recommendation from vets and hospitals.

Alfie spent a great deal of time at A.I. DuPont Children’s Hospital as well as an At-Risk Youth Facility.

In just one of many stories that could be shared about Alfie’s work, he visited a young girl who had survived a horrific car accident. She had a terrible time with the many procedures she had to endure, and the day Alfie was visiting, at least 10 nurses were present to hold her down to do required bloodwork. A doctor familiar with Alfie asked if he could stay with her during the procedure.

Alfie climbed into her bed, and she cradled his head as the nurse completed bloodwork, with no restraint required. You can imagine the shock, relief, and awe that everyone present felt watching Alfie work his magic with a young girl who desperately needed him.

Alfie gave back to the rescue and shelter world by being an amazing pit bull ambassador, a dog who forced so many people to reconsider their preconceived notions about the breed. There wasn’t an animal or a human that Alfie didn’t consider a friend. Sherry’s Facebook page is filled with photos of Alfie from dozens of different people: Alfie with their children, Alfie with animals that he fostered and were adopted, and Alfie making a difference and a positive impression.

One month ago, in the arms of those who loved him most, Alfie peacefully left this world, a world that had shown him the best that humans had to offer as well as the worst.

A world that he changed in so many ways. Children’s lives were enriched through his work as a therapy dog and the image of pit bulls changed by a dog who endured so much and still loved with his whole heart.

Although Alfie is gone, our memories of him are strong and his legacy will always live on.

Fosters needed: The kittens are arriving at the shelter! Foster homes are needed to help with kittens of all colors and ages. If you are interested in fostering, visit https://southjerseyregionalanimalshelter.org/