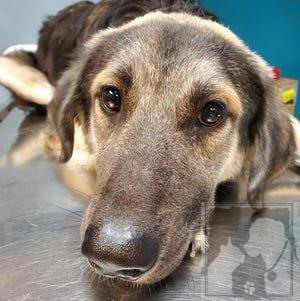 Last week the shelter received a phone call from a man needing to release seven Shepherd mix puppies. Apparently, the animal control officer in his township had been in contact with him several times, at first trying to help the owner. Then as time went by, trying to help the puppies out of a bad situation. It seems the man could not bring himself to give up any of the pups, until at seven months, he realized that they were too much to care for. When he finally did show up at the shelter, he brought only three and was non-committal about when he could bring in the remaining four pups. We are working with animal control to make that happen as soon as possible, but for the moment, we at least have three of the seven to start working with.

At seven months of age, many important milestones in a young dog’s life should have been met. These are very formative months in which socialization, housebreaking and obedience training should have been emphasized. It does not appear that the pups were abused in any way, they simply have missed out on the daily experiences that help them develop into companion animals. The owner was very emotional when he brought the dogs in and it did appear that he cared for them, even if his care was misguided.  Although these dogs are behind, they are still young and malleable enough to become great pets.

They were understandably terrified when they first entered the shelter. Having never left the property they were born on and having social interaction with just a couple of people, the experience of being loaded into the car and then dropped off at the shelter had to be quite a traumatic experience for them. In spite of their fear, our vet tech staff was immediately able to check them out, vaccinate, de-worm and treat them for any parasites they might be carrying. This is pretty remarkable and speaks to their innate desire to have positive interactions with people. Often animals that lack social skills must be given a few days to get more comfortable before a full health evaluation can be performed.

At first they would run out to their outdoor kennels when approached, but now, just two days later, none of them are running away and there’s even some tail wagging going on. The staff will continue to work in gaining their trust and getting them to the next phase of finding good homes for them. Within a few days we should have a better idea of what these first three pups need to help them gain confidence in their individuality as opposed to simply being part of the pack. Whether they are adopted out directly, go to foster homes or rescue partners, will depend on how well they adapt to new experiences and new people.

We hope to have the remainder of the litter sometime this week so that they too can get into good homes and begin their training. These dogs will require owners that are dedicated to giving them the time and positive reinforcement they’ll need, but I see intelligence in their eyes and a yearning for attention in their mannerisms. If you’re interested in Timmy, Lassie or Maxine, we encourage you to make an appointment to meet with them; the sooner, the better.