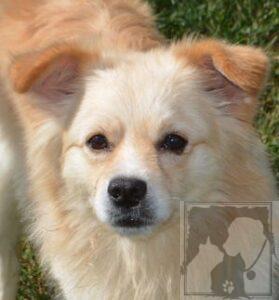 It’s hard to see pets end up in shelters, but it’s even worse when they react to being here with extreme fear. Some have the double whammy of having been traumatized by whatever event led to them being brought in. Just as with people, animals react in different ways to fear; some hide in the far back corner of their kennel, some hide under their bed and some show signs of aggression because of their heightened defense instincts.

Even when they react in an aggressive manner, it’s very apparent that it’s a survival tactic derived from fear rather than an offensive attack. At the shelter we spend a huge amount of time gaining the trust of frightened pets that simply need a little time, patience and tender loving care to come around.

Last week one of our local animal control officers rolled up with a little blonde Pomeranian mix in a crate in his van. When it came time to get the dog out of the crate and into the shelter, he was having none of it! No amount of coaxing had any effect, but finally one of our veterinary technicians was able to get close enough to get a leash looped around his neck and they got him inside into a kennel. When I went back to see the dog that had caused such a ruckus, I had to laugh at seeing that this “adorable little foo foo looking pup” had given those two guys a run for their money! On the other hand, he had a lot to say to me too as I knelt down to try to soothe him a little.

A few hours, three visits to his kennel, and one-half of a hot dog later, he was my best friend. I considered myself very lucky as sometimes it takes days and even weeks to get them to warm up. To be fair, he’s a small boy that probably doesn’t weigh 20 pounds soaking wet, so I felt pretty sure I could survive it if things went south when I entered the kennel. LOL! He actually turned out to be a real doll baby that aside from hot dogs, loves belly rubs and running around being silly in the play yard. He also appears to be housebroken, which is a real plus!

It turns out that “Skipper” had indeed suffered some trauma that resulted in his ending up as our guest. He had nearly been hit by a car. As per a neighbor, the driver of the car put him inside the fence of the nearby house thinking he must belong there. The homeowner called the police station once she realized the dog was in her yard and the animal control officer found the poor little guy hiding underneath an oil tank in the back yard. Unwilling to leave his hiding place, the ACO had to use a pole leash to get him out from under the tank. Needless to say, Skipper was pretty much a basket case by the time he got to the shelter.

In the end, this scared pup just needs to gain confidence and know that he is safe. We didn’t want to traumatize him any further so we took a couple of days to get his veterinary care completed and then moved him to a foster home where he can decompress and prepare for permanent adoption. I had gotten so attached to him in the few days that he was here that I felt bad handing him off to his new foster mom. I’m confident that he’ll make a full recovery from this scary chapter in his life. He is a gorgeous, young adult that will be a fun and loving pet for some lucky person!

Shelter events: The final low-cost vaccine clinic of the year will be held from 9 a.m. to noon Oct. 1. Vaccines are $15 each. Microchips and flea and tick preventative will also be available. Appointments are required. To schedule an appointment, visit sjras.org.