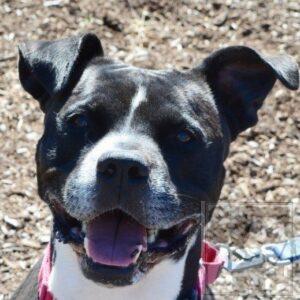 Shelter animals with stories behind them generally get a lot more attention than those that have no known background and no physical attributes or needs that make them stand out from the crowd.

If the dog or cat has no sob story to tug at the heart strings and isn’t young or gorgeous, they often sit unnoticed and passed on for weeks or months on end. Such is the case with Barkley, a dog that has now been at the shelter for more than six months.

He’s just one of the many dogs that are brought in as a stray found wandering the streets. Was he abandoned? Maybe, but we don’t know that.

Could his owner have become suddenly incapacitated or homeless? Maybe, but we don’t know that.

Was he ever tied on a heavy tow chain to a tree in freezing weather with no shelter? Maybe, but we don’t know that.

Who knows, maybe he’s done something amazing in his life like save his owner from a burning house or sound the alert when a child was in danger … but we don’t know that.

And so, he suffers the fate of millions of other dogs in shelters across the country; sitting, waiting and hoping that he will not break down from too much time in the confinements of shelter life before some special person walks in the door and recognizes him as something special.

What we do know about him is that he’s a middle-age, black and white Pit Bull, who is smart as a whip and is amazing in his ability to pick up on new commands. One of our seasoned volunteers picks him up and takes him for walks in the park and has found him to be full of pleasant surprises in his intelligence and demeanor. But you can’t see or appreciate those things in a simple photograph which is how most shelter animals are initially discovered.

What do you with a dog like that? He’s not some big impressive blockhead that people tend to be attracted to. He’s not gorgeous or a puppy or one of those dogs that tries to turn himself inside out to get your attention.

He comes off like your “average Joe” but really, he’s a diamond in the rough. And six months later, he’s still waiting …

Source: South Jersey Regional Animal Shelter: What do we know about Barkley?