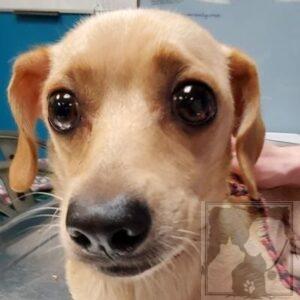 We have four new guests here at the shelter that blew in from a ‘perfect storm’ type situation; in other words, “What a MESS!!!” It all started when our outreach department got a call for help. The original plea was for five dogs, four inside and one out, that needed to be rehomed because their owner had been incapacitated and could not return to the home. Since transportation was an issue, arrangements were made for the shelter team to go to the home to evaluate the situation and the dogs. Having taken just a few steps onto the property, the team realized it was beyond our jurisdiction and that we would need intervention from law enforcement.

The dog that was outside on a chain had multiple violations of the laws governing the requirements for outside pets and the door of the house had a sign posted warning that there were hazardous conditions inside. The relative of the home owner that had arranged to meet us failed to show up, so we were left with no other option but to call in the police.

Our outreach program was put into place to help prevent situations like this. We hope pet owners will reach out for help before the situation becomes desperate and untenable. Once we arrived on the property however, we had no choice in the matter. There were dogs inside what appeared to be an abandoned house and one tied up with shelter, nourishment, sanitary and health violations.

Due to the legalities of entering the home, the hazards within and the difficulty lining up family members and the proper legal agencies, it took three days to get the dogs out of the house. All we could do was make sure they had food and water until they could be removed. Even when entry was gained, only two of the four dogs originally said to be inside were spotted among the chaos of the house.

Ultimately, two dogs were finally removed from within the home and one more that had apparently escaped from the house turned up a couple of days later. The outside dog was removed without incident. All four dogs, three Chihuahua mixes and one Chow mix were released to our custody. Now, the real work begins.

The little ones are very scared and still traumatized by the upheaval in their lives. The Chow mix is more stoic but has been living at the end of a chain with inadequate care for who knows how long. Sheebe, highlighted in the accompanying pictures, is the first to respond well to good care and affection. We hope to get her into a real home as quickly as possible. The others are still being evaluated as to whether they can be adopted out directly or whether they will need care in a foster home until they’re ready to go to a permanent home. Whatever it takes, we’re determined to get these dogs into homes that will turn their lives around by giving them the love, respect and care they deserve.