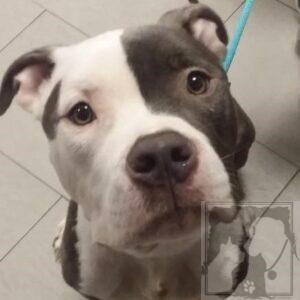 The staff at the South Jersey Regional Animal Shelter is forever entertained by the modes of transport, the fashion accoutrements and the inventive ‘leashes and tie outs’ that many of our animals come in with. We’ve had cats brought to the shelter in crab traps, Barbie doll boxes and hamster cages. We’ve had dogs dragging bike inner tubes, electrical cords and winter scarves from their collars. Some of the fashion statements include actual jewelry, multi colored fur dyes, motorcycle jackets and fancy pajamas.

Last week one of our Vineland Animal Control Officers came in with a big pit bull that she had found sauntering down the street in a raincoat. When she first came in the door with him, we were smiling at the image of this big, block-headed dog in rain gear; but our smiles quickly turned to frowns of concern. As the closer he got, the worse he looked. This handsome guy, that someone had bothered to try to protect from the rain, was about 30 pounds underweight and had a horrific flea infestation that had turned his gums chalky white from the advanced anemia the parasites had caused.

Fred is a good-looking blue and white pit bull with a very gentle soul. He’s about 5- or 6-years-old and he’s obviously been through some tough times. Conversely, his pleasant demeanor and the fact that he had the coat on would lead one to believe that someone loved him, had shown him affection and cared enough about him to try to keep the rain off him in the prior night’s storm.

It’s been six days since Fred arrived and no one has come looking for him. Are they afraid to come? Do they not know where to look? Whoever had him obviously could not care for him properly, they either lacked the knowledge, the means or both. It’s frustrating and confusing in a situation like this because you just wish that the person had reached out for help rather than let the dog suffer as he surely must have.

In this particular case, Fred has no apparent health issues other than those caused by the lack of necessary maintenance. All of this could possibly have been prevented had the owner been educated and directed toward available resources when things started to go south with the dog’s care.

Since our Outreach Program began operating, we have often found that the folks that need help for their pets are usually in need themselves. Sometimes those hard times are temporary and we are able to help with minimal assistance. Other times the problems cannot be fixed and re-homing the animal is necessary. Either way, if you know of anyone that needs guidance or help in caring for their pets, please encourage them to reach out to us for help. We can’t always provide everything that pet owners need, but we can certainly prevent pets from being unnecessarily neglected.