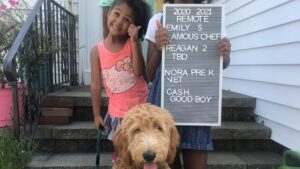 You may have heard the expression, “Everyone thinks they have the best dog and they are all right.” Apparently, the same thing can be said about cats, ferrets, rabbits, roosters and all manner of rescue pets that found new homes in 2020.

Area rescues were very busy last year uniting pets in their care with forever families. And those new pet parents say it added something positive during a very challenging year.

One overwhelming theme to those stories was that as more people stayed home amid the COVID-19 pandemic they found more time to spend with a new pet or needed a companion to help brighten their days.

Karina Perez had wanted a rabbit for years, but didn’t have the time to properly care for one. But when she started working from home during the pandemic, she decided it was time. She found Winston at the South Jersey Regional Animal Shelter. Perez said, “I rescued him, but he definitely rescued me in return!”

“Failure” was also a popular reason for adopting. Among the volunteers who support rescues are foster families who help in a variety of situations, such as when pets can’t handle the stress of being in a shelter or need training or are recovering from a medical situation. They take pets into their homes and help them get ready to be adopted by their forever families.

Sometimes foster families fail, but in a good way: realizing the pet they are fostering fits so well into their family they decide to give it a forever home.

Cheech came to Chad and Mandi Puschel in May as their 10th foster pet for the year from the Voorhees Animal Orphanage. He had previously been adopted but was returned to the shelter. He was having a difficult time because he was an anxious and high energy dog.

The Puschels gave him plenty of structure and exercise to help him decompress and learn some manners. A potential new family never showed for their meeting and despite a large stack of applications, no one seemed to be the right fit for him.

After much thought, the Puschels decided to adopt him. They had lost both of their dogs in 2019 and felt they were the right fit for Cheech. The Puschels were both working from home because of the pandemic and knew they had the time to commit to him.

The Puschels wrote, “We cannot imagine life without him! We are forever grateful to the VAO for giving him the chance to be a good boy.”

Whether it was a photo online or having a cat or kitten start purring during a shelter visit, many adopters described how they instantly fell in love with the newest additions to their families.

When Rosemarie Pichini and her husband Vincent Pichini saw Rojo Jojo’s big eyes and floppy ears, they knew they had to bring him home from South Jersey Regional Animal Shelter. While pit bulls are sometimes known to be aggressive, Rosemarie advised, Rojo “has to be the sweetest pit you will ever come across.”

With the pandemic casting a shadow over 2020, adopters especially appreciated the lessons their new family members taught them.

Heidi Beerman and her family adopted Emmett from the South Jersey Regional Animal Shelter. Beerman wrote, “I would say Emmett has humbled us. He helped remind us of the simpler things in life when the world became so uncertain. Trust easier, forgive faster, and really all you need in life is love — well — and some belly rubs and milk bones too!”

Many people shared stories of pets that they had lost due to illness. Although sad about their losses, many decided to open their homes to new pets and were lucky enough to find just the right ones.

Such is the story of Bubbles, the 70-pound dog, who thinks she’s a lap dog. Henry Knipe shared the story of the void in his family’s life after their dog died of degenerative disc syndrome in March. Bubbles, adopted from South Jersey Regional Animal Shelter, managed to “overflow that void.” Although Bubbles had a rough start to her life, she is a very sweet, cuddly and playful dog. Knipe shared, “She is the light of our lives and just the greatest, most sweet, best friend anyone can ask for. Without Bubbles, this quarantine would have been unbearable.”

Sometimes the names that shelter pets have or are given offer some indication as to their disposition.

Tia Vrontis and her fiancé Joe Bonanno met Fred Astair at South Jersey Regional Animal Shelter, it turned out he was more Disney character Wreck-It Ralph and less like the dapper dancer whose famous name he carried.

The couple said he pushed his way into the visiting room and made himself at home in their laps. Once adopted, Fred became Ralphie.

While many adopters who shared their stories were from the South Jersey area, others travelled a distance to meet their new best friends.

Thomas Pinelli from upstate New York, shared that Bocci, adopted from the South Jersey Regional Animal Shelter in Vineland, has 62 acres to explore at his new home and enjoyed leaping in the snow after a recent storm.

Sometimes adopters are looking for a specific type of pet. Sometimes people want a puppy or a kitten or a certain breed. Then there are the people who give special pets a chance.

At the Voorhees Animal Orphanage, Edgar’s caretakers were worried no one would take in a 15-year-old cat.

But lucky for Edgar, Rachel Connelly from Sheehan Veterinary Centre saw a social media post about him and shared it Dr. Ed Sheehan’s wife. The Sheehans like to give senior kitties from local shelters a home as they feel these cats get overlooked because of their age and potential for medical issues.

So Edgar, now known as Mr. Edgar Wilson to denote his distinguished status, became the office cat after the Sheehans adopted him in October. Now he gets lots of love and the very best medical care. Unfortunately, Mr. Wilson has FIV, or Feline AIDs, and there’s no treatment for it. Due to this, he has a recurring upper respiratory issue as well as scarring on his little nose. His ears are folded over from years of chronic, untreated infections, and his little meow is raspy. He is on a couple of medications, which he takes with no issue and despite all of this, he is the sweetest and happiest cat. He just wants someone to pet him, hold him, and give him attention.

It’s important to the Sheehans that people understand that even though these pets may have more years under their belt, it doesn’t mean they are less deserving of a family and a home.

Sometimes it just takes perseverance to find the right pet for your family.

Tiffany Aryee and her family had been trying to adopt a puppy from the South Jersey Regional Animal Shelter for more than a year. They didn’t have any luck. But then on a Monday in July, Aryee learned about Cash, who was about 6 months old and had been surrendered by his owner because of a change in circumstances likely due to COVID-19. The family met him that day and Cash went to his new home a few days later.

Aryee wrote, “We waited a long time to find the right dog and he was worth the wait.”

When it was time to take the 2020-2021 Remote Back-to-School photo, Cash joined Emily, a fifth grader and future famous chef, Reagan, a second grader, who is still considering her options, and Nora, a preschooler, who plans to be a veterinarian. As for Cash, he’s already achieved professional success as a “good dog.”

If you are considering adopting a pet, Bev Greco, executive director, South Jersey Regional Animal Shelter, offered tips in a recent column for The Daily Journal.

For more information on the South Jersey shelters that helped contribute to this article, visit:

Source: South Jersey shelter tales (or tails?): Why 2020 was a good year for new pets