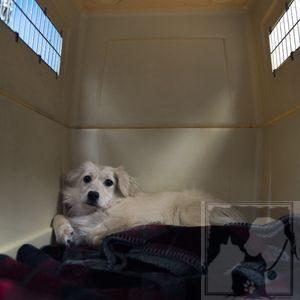 The Society for the Prevention of Cruelty to Animals staff pulled up to the shelter’s side door to unload its precious cargo, affectionately known as Amos, Beth and Regina.

“There she is, isn’t she a cutie,” said Bev Greco, the SPCA executive director, as she welcomed the smallest arrival. Turning her attention to the drum beat of a wagging tail, she greeted another dog. “Look at you, you’re handsome.”

The dogs and puppies are being transported to shelters around the U.S. and Canada, thanks to the Humane Society International.

Humane Society International is leading an effort to banish dog farming in South Korea, the only country where these farms exist solely to supply the dog meat market.

Within the past year, 485 dogs have arrived in the United States and Canada after the humane society convinced five dog farmers to end the practice.

While the dogs’ plight is subject to international scrutiny, the SPCA saw three frightened pups in need of some tender loving care.

“This is the first time we’re doing this kind of thing,” said Greco. It was made possible through an existing relationship with the humane society.

“We are considered an emergency placement partner,” Greco said, noting she received a month’s notice they would receive the dogs.

For a month, Beth, Amos and Regina remained quarantined overseas. They arrived in the United States two weeks ago and were sheltered at St. Hubert’s Animal Welfare Center in Morris County, where the SPCA picked them up Thursday.

“I expected the two big ones, I didn’t expect that little baby girl,” Greco said, referring to Beth.

To help transition them into pet life, the dogs will live with foster families, said Jessica Morrison, the shelter’s foster coordinator.

Michelle Spatafore of Vineland, an experienced SPCA foster home provider, was there to greet Beth, a 5-month-old spaniel mix.

“I can’t wait to get her home,” she said, sitting at the edge of the crate assuring the trembling pup she was now safe.

“I’ll keep her separated for a little while until she adjusts,” Spatafore said. “It’s a different life.”

These dogs never wore a collar or walked on a leash.

There were tell-tale signs of harsh lives — exposed ribs due to malnutrition and splayed feet from standing on wire.

Dogs are the most resilient animals, Morrison said. Despite their rough starts, the dogs were willing to reach out.

“They are social animals,” she said.

Amos, the most outgoing, was the first to take a few tentative steps from his crate. His dark eyes scanned the pen before he walked its perimeter, sniffing the new scents. Shelter staff sat crossed-legged on the floor waiting for the 2-year-old mixed breed dog to come to them.

Tempted with food, Amos inched forward to accept their touch with a wagging tail. Soon, he felt secure enough to close his eyes and drift off to sleep.

The focus now is to help the dogs develop some self-confidence and let them show their personalities, Morrison said.

“Then we will be able to determine what type of home is the best fit for them,” she said. “As much as they are not our typical strays — we’ve gotten feral dogs, unsocialized dogs, backyard dogs —  we’ve seen dogs like this before; they are just from a different circumstance.”

The SPCA committed to three dogs so they wouldn’t be pulling resources away from local strays.

“This is a little different,” Greco said. “First of all, it’s for a really great cause and we feel we should be part of the solution.”

Instead of an iron fist, the humane society approach was to offer a helping hand.

“We wanted to be a part of this because they’re helping the people, they are not just shutting these farms down,” Greco said.  “They are helping the farm owners convert to other types of businesses.”

The farm where the SPCA pups came from is converting to a mushroom farm, Greco said. By offering the farmers a new way to earn a living, it eliminates the need to dog farm.

“That is really refreshing to have a cruel industry like this come to an end,” Greco said.

Amos, Regina and Beth will now have time to adjust before they are available for adoption.

“They will spend however long it takes in foster care until we deem them adoptable,” Morrison said. “We are going to do what’s right for them.”

People may submit adoption applications but there’s no timetable for when the dogs will be ready to place. However, the shelter staff noted there are many other shelter dogs who are also looking for homes.

Donations may be sent to the CCSPCA, 1244 N. Delsea Drive, Vineland, NJ, 08360. Funds will be used for a special diet to help the dogs regain their body fat as well as medical treatment.

Because they are new to the country, the dogs don’t have many friends. They would welcome letters and get well cards from area children. The shelter’s junior volunteers are ready to read the correspondence to pups to help them adjust to their new surroundings.