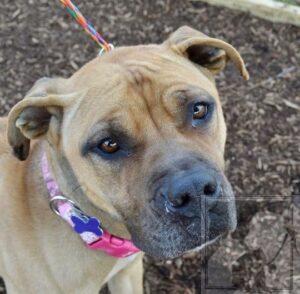 In just a few days, we'll be "Marching" into spring. In a little more than a week, we'll be "springing" ahead and enjoying a little more daylight in the evening. Any minute now, the skies will open up and the kittens will rain down and wreak havoc on our poor shelter worker souls.

Having had such a mild winter, there's no doubt that the breeding season will be early, hot and heavy. The good news is that we've seen a definite uptick in spay and neuter appointments in our clinic; many thanks to those of you who are being proactive by altering your pets before they start to reproduce.

Sadly, everyone hasn't gotten the memo about pet overpopulation.

A woman came into the shelter last week to reclaim a young pitbull puppy that had been removed from her property for being improperly tethered. She wanted assurance that we hadn't "done any surgeries on her," so I guess we know the fate of that little pup.

Unfortunately, I was not in the office at the time she made this inquiry. I would have liked to take her for a tour of our shelter. I would like to have walked her past kennel, after kennel, after kennel, of homeless pitbulls. I would like to have asked her why she would want to contribute to the horrific overpopulation of the most abused, neglected and feared breed in America. They also are, by far, the number one breed of dog to be euthanized in shelters.

In hindsight, maybe it's a good thing that I wasn't out there to talk to her. Perhaps my professional filter would have failed me. Between the neglectful and irresponsible acts of having tied a three-month old puppy to a truck, leaving it unattended and without shelter and then having the audacity to be concerned that the pup might be ruined for breeding purposes, it just might have gotten ugly.
I read a study back in 2018 that estimated there were 3.6 million pitbulls in the U.S. at that time and that 1.2 million of them would end up in shelters. I cannot speak for the validity of these numbers, I just know from what we see here in our shelter and what I see in and hear about in other shelters across the country that the numbers are staggering. This can only be the result of human irresponsibility. Whether it's breeding for the sole purpose of selling the puppies, breeding them for blood sports, or simply neglecting to spay or neuter them in general, it is uncaring, uneducated, self-serving pitbull owners who are failing these poor dogs so dreadfully. The saving grace is that there are now so many people out there who love and celebrate the breed and who make every effort to help their own pits be every bit the loyal, loving, beautiful dogs they can be. 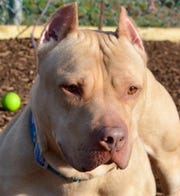 It made my staff sick and heartbroken to have to hand that poor puppy over to her owner. Even though the pup had only been in our care for four days, she had already stolen the hearts of those caring for her. Fortunately, law enforcement officials are involved and perhaps the consequences of the violations found on the property will help influence, in a positive way, the course of this little puppy girl's life.

Please help spread the word - our spay and neuter clinic runs two to three times a week. Appointments can be scheduled easily and conveniently online. Go to our website, SJRAS.org, hit the SERVICES drop down menu, click on SPAY AND NEUTER CLINIC … and perhaps, the world will be a more humane place for one lucky cat or dog.