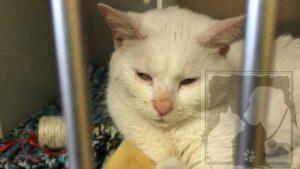 Partnerships with regional animal rescue organizations aligned to give all the surrenders and strays a second chance to find homes, said Maria Stoerrle, the Society for the Prevention of Cruelty to Animals shelter/foster coordinator.

“Monday, noon, our cat room was empty,” she said. “Monday, by 4 o’clock, we had some new residences in the cat room because intake never stops.”

Stoerrle pet a few of the new arrivals that were understandably anxious.

“This is the calm before the storm,” Stoerrle said, noting the half-dozen reoccupied cages.

Soon the adoption room will reach capacity, filled with the consequences of late-night rendezvous.

It’s not unusual for the North Delsea Drive shelter to take in 12-20 kittens per day, despite the SPCA’s aggressive spay/neuter campaign.

Other animal rescue organizations help out by arranging bulk transports of kittens and cats to their facilities. This boosts the odds of adoption for the felines.

With a steady supply of kittens, Stoerrle said, older cats tend to get overlooked.

On Monday, the Delaware County SPCA  of Media, Pennsylvania, was to take them.

At the last minute, they even took on Old Henry, a hard-luck case, who wasn’t officially up for adoption. The 8-year-old had it rough living on the streets. He is missing teeth and has a “crumpled” ear.

The SPCA piques interest in its animals through social media, Stoerrle said. The pet contenders are featured on the SPCA Facebook page as well as on a Second Chance Facebook page, set up for animals who require a little more attention or care.

“We work hard to promote them,” she said. The posted photos and biographies give the public a peek at the pets’ faces as well as their personalities.

To have all their cats placed was a milestone moment.

“It’s really a nice story when you accomplish a goal,” she said.

“I took her to get a stopwatch,” Greco said.

That was welcome, Stoerrle said. It would send the wrong message if people came to adopt a pet and the SPCA didn’t have any cats.

She noted they also have 70 dogs looking for homes.

Reaching the full-placement status is again her goal.

“It’s definitely going to happen,” she said, declining to make a prediction knowing it may be quite a while.